Photos of your set-up / studio

Um, how do I get the image to link up? Can't figure it out.

Yes very tidy. Something to aspire to lol, I've just finished an EP and have 30 or so new tracks on the go, plus scanning 15 years of 35mm film. That's my excuse anyway LOL. You need to host it on something like imgur. Google drive sucks for embedding

There, fixed this for you

PS.: and darn, I thought you were commenting on my setup (the tidy part)

and thanks. I linked it to a GS post instead. My mess is a consequence of a recent house move. Last room to get done!
Bandcamp
Facebook
Soundcloud
Soundware Shop
Top

History of my studio, hope you don't get offended by the slowly growing pile of junk

On the left you see the mouse of my Atari ST running editors and Master Tracks Pro MIDI sequencer. Not seen is the Tascam 424 Portastudio.

The SQ-80 plus the three other synths yielded a whopping 51 voices of polyphony, those were the days.

The Motif ES replaced all the gear from the last photo, with 128 voices and 18 FX processors on board. The dotcom eventually grew to 44 spaces. On the left is a Boss BR-864 digital 8 track. The mouse connects to a WinXP laptop used for Motif editor programs and sequencer backups.

The dotcom is gone, a Tascam 24 track replaces the Boss. I took the Yamaha and DOD racks out of mothballs to use with the Tascam. The knobless rack is the head unit for a Peavey MIDIbase bass guitar synth controller. Within 6 months Ableton Live would replace the Tascam.

The last gasp for hardware. Motif XF replaced the ES in 2011, with an Evolver and a Make Noise 0-Coast doing the analog noises. A few months after this was taken, all three synths were gone. Notice the triple monitor setup: M-Audio near fields, Kenwoods on the wall powered by an old stereo receiver and Sony cassette recorder for mono/trash speaker reference.

100% in the box since fall of 2017. Running Logic with a Nektar Panorama controller providing a workstation-like interface. Lean and mean.
I listened to Hatfield and the North at Rainbow. They were very wonderful and they made my heart a prisoner.
Top

These days, nowhere. I even deleted my SoundCloud account earlier this year. I have very little music recorded I feel is good enough to warrant others hearing it, probably less than an hour. I have hundreds of hours of sketches that ended up going nowhere, especially from my modular days

I'm not a composer, I'm a bassist so it's child's play to slap together a chord progression and groove in an hour or so and then...brick wall, on to the next one.

It's always been for my own fun and curiosity, especially my fascination with chordal harmony. I keep recordings around and go listen to them later (sometimes years later) to get a fresh perspective on whether any are worth revisiting.

My long term musical outlet is playing bass, I've been working steadily for 40 years. Recording is OK, but live playing is where the real fun is.
I listened to Hatfield and the North at Rainbow. They were very wonderful and they made my heart a prisoner.
Top

Cool! I'm totally procrastinating about that. What bass do you play? I treated myself to a Hofner violin bass a few years ago.
Bandcamp
Facebook
Soundcloud
Soundware Shop
Top

Waveforms, and filters, and knobs. Oh my!
Top

New Synth Day (well, new to me). May or may not be a keeper. I was considering about 5 options, but space is tight (which ruled out a lot) and there were key criteria I wanted to meet. None of the options were perfect, but this came up at a decent price so I went for it.

Im mainly a live player, and need to keep in a footprint. So this is the rig as it stands:

here is a video of mine

A glimpse of my studio in rural Wales. 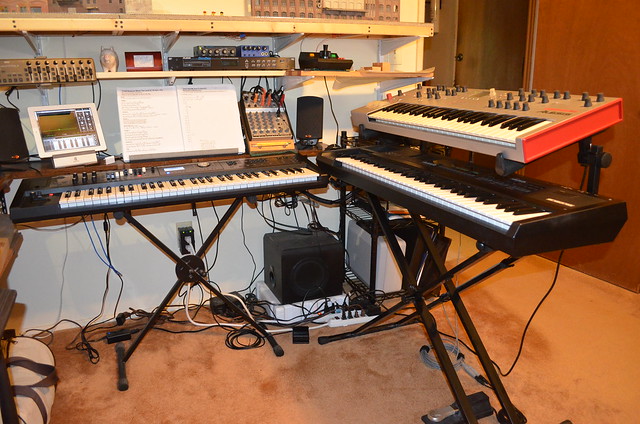 wow nice setups in the pictures

When I first learned how to play keyboard, I learned on organ. So, after I sold the organ and went to multi-keyboard set-ups, I kept the overall organ design, which includes layers of keyboards and a set of bass pedals. I originally built this stand back in 1997, but have modified it quite a bit since then, and of course, have changed out its keyboards several times, as well. It continues to be a set-up that I modify and adjust as needed. One of my recent modifications was to install a set of LED light strips to make it easier to see the controls on the main keyboards. The photo makes it look like the LED's are blue, but they're really just a cool white...

Note that you just have to click the links to see the images. If someone can tell me how to upload images to the site so they are immediately visible, please let me know, as I do not see an obvious way to do this. When I try to use the [IMG] functions, they just end up showing the words "Image" where the picture should be.

And here's a photo with the lights turned off...

The lower 88-key model is a Casio CDP-200R. I just wanted something on a budget with weighted keys for practicing piano-style playing, and I got it refurbished for only $250. It has a decent piano sound, good organs and synth sounds, but not-so-good string sounds. The middle keyboard is a Yamaha PSR-E433, which is my main keyboard. I may submit a review of this keyboard, but for now, suffice to say that it is a very flexible keyboard that had a great price (also about $250 when new), lots of high quality sounds including strings, brass, choir, pianos, and synth sounds, and basic editable filters and envelope generators. And of course, the top keyboard is a Roland GAIA SH-01, which I just recently purchased. I know a lot of people don't like the GAIA SH-01, but it is incredibly versatile, with 3 distinct synth engines onboard -- not just 3 oscillators, but 3 full engines, with each oscillator having its own filter, LFO, and amp, and each oscillator, filter, and amp of each engine having it's own envelope generator -- for a total of 9 envelope generators. It's lacking a bit in deep bass, but otherwise does most other sounds very well.

As for the bass pedals, they are actually wired to the bottom octave of an old Casio MT-68 mini keyboard, which is inside the stand and out of sight. Since that old keyboard is completely controlled by old-school hard switches, I can set up the sound I want, and then that is the sound that will play any time I power it up. The pedals were originally a very basic set of self-contained bass pedals that I got when I first set up a multi-keyboard set-up way back in 1985, using a different stand. But, it kept going out of tune. It had a little tuning pot, but eventually, I reached the end of the tuning pot's range, so that's when I gutted it and just hooked the pedals, like switches, to the contacts of the lower keys of the Casio. The other pedals, recessed and to the right of the bass pedals, are a sustain pedal which I modified to allow it to control both the Yamaha PSR-E433 and Casio CDP-200R at the same time, and a stereo volume pedal.

On top, there is a Samson MXP124 mixer, a speaker selector, an old Realistic amp with a couple of old Sony mini speakers on top of it, and an Onkyo stereo receiver. The speakers on each side of the GAIA SH-01 came with and are hooked up to the Onkyo and provide the main sound for the entire set-up. On top of the Onkyo amp is a Behringer DR-600 reverb pedal that provides reverb for the entire set-up. The speaker selector, Realistic amp, and Sony mini speakers are for when I'm multi-track recording to a DAW on my computer. There is a small Behringer audio-to-USB converter out of sight, and by selecting the output of that converter to go to the Realistic amp (instead of the mixer), it allows me to listen to tracks that I've already recorded while I record a new track, without the sound of the previous tracks being also mixed and recorded on the new track.

Finally, something that is currently completely out of sight, is a Realistic 100 watt amp hooked to a Cerwin Vega speaker with a 15 inch woofer. As I currently live in an apartment, I don't use that too much, but it is there if I want to crank up some bass.

This system is designed for live playing, but it is also designed for recording by just setting up my computer next to it and hooking up the Behringer converter's USB cable to the computer. I've also made it easy to remove the PSR-E433 and the GAIA SH-01 and their power supplies in case I want to use them for gigging in the future.
Top
Post Reply
76 posts