My first. That thing's heavy - I got fed up with the one I had because the buttons had got so unreliable. I didn't know enough at the time to try and get them going again. The swing on it is really nice as well.
by philbar
I use a mk1 machinedrum sps-1 and a MPC1000 and various softsynths.

the machinedrum is good.
by vangelis

by veer chasm
Tama Rockstar 5 piece w/ Zildjian and Sabian cymbals
Alesis SR18
Nord Lead and MMT8 sequencer
by Joey
I use my virus for a few drum sounds here and there, but mostly I just use battery 3

If I'm doing live drums I use my roland V drum kit into a few fx boxes, or I mic up my pearl kit.
by ronP
.


I've been creating clipped, organic percussion tones with my KORG Electribe (EA-1 mkII) and then layering those two parts within a beat using the sampled drum and cymbal sounds on board the ZOOM MRT-3B. For added live feel fun, I'm using a foot switch, which controls the high hat on the MRT-3B (great for that groovy "Tsst-Tsst" riff).

My favorite is an Alesis HR:16B which I had bent by Robert at Alien Devices. Here's a link in case you're interested --- it's amazing --- tons of possibilities, all of them noisy, cracked out, f**k up, mad, mad.

Incidentally, I bought the Alesis on the cheap from Trevor Dunn, bass player for Mr. Bungle & a million other things... Randomly, from craigslist... 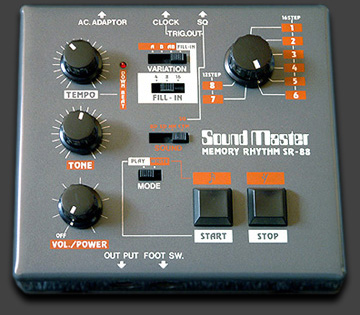 Snap! I've been selling some bits lately, but those two remain.

Other than that, I've been getting into my ES-1 recently, but the majority of my drums come from samples (have a folder with about 20,000 drum sounds which seriously needs sorting out!) sequenced in Ableton Live.

My next step is building some kind of drum trigger set up. V-Drums on the cheap.
by Tyler2000
srry, conection problems...

by novielo
tyler, how does the mdp 40 sounds like? looks interresting
by jayman