Bitexion wrote:So you're saying you NEVER miss that second VCO on the CS50/60?
Just 1 oscillator sounds a little weak-ish to me..

By that logic my KORG PolySix must sound weak too. Not the case I'm afraid.

1 VCO per voice has its applications ya know. Like pure, deep basses that don't beat.
Top

Not that I'll ever have a chance of owning any one of them anyways, I haven't seen a CS-80 or 60 in norwegian ads in years.
A nearby synth store had one for a couple weeks, which I tried out. Knowing nothing about how this relic works, I hit presets but hey, nothing else on the panel works! So I realized in "preset mode" you cannot change the sound except for the lowest row of knobs.

Then I tried to strike a chord..what should be harmonic turned into disharmonic terror. Switched it off. Came back 2 weeks later, and the synth was gone. Some enthusiast had ran off with it, saying he'd fix the tuning easily.
Top

Then you'd be doing a great disservice to the 60.
http://www.heathfinnie.com
http://thesecretlifeofdaytime.blogspot.com/
Top

hey, if any of you cs-80 owners in this thread want to sell your guy, im in the market. will go to a great home, i promise.

please PM me. i would trade some things(in addition to cash, of course) for a cs-80.
Top

It's telling that a few people have said that they finally got their CS-80 and sold it due to reliability issues. What's the point of owning a broken synthesizer that spends its time in and out of the shop unless you're planning to sample it and move on. You could possibly rent one for a project, Michael Boddicker's rental house in LA (www.4sst.net) used to rent one, but I don't see it on the site anymore. It's probably not worth the hassle to own one, unless you have a full-time maintenance staff.
Andromeda • Voyager • Super Jupiter + Programmer • TX-802 • Two GigaStudio PCs
http://www.jefflaity.com/studio
Top

I dunno, it all depends on the environment you keep it in. If it sits still in a well-tempered environment it will stay in tune for years I've been told.

Don't put it next to an open window or door though

And the later CS80 models had temperature stabilising circuitry built in to minimize the heating problem.
Top

Also, there are mods that can be done to increase tuning reliability. A web search will produce detailed descriptions of the mods.

Wow, you have friends who owned CS-80's? Kudos to you!
The closest thing I have to a friend who knows about synths owns a JP8000 that he never uses.
Top

One of them became my friend the week that he sold his last CS80. Damn, I missed getting one by a mere few days. Argh!

Ironically I think that one ended up w/ me WDW. 8)
Resonance in Humans is called Empathy.
Top

I love and hate you.

RavenSmith wrote:Firstly additive came before analog(subtractive). Additive was the first form of synthesis! And when it did come out in the form of a synthesizer the only common thing this additive synth shared with analog synths is a filter.

i don't mean to hijack the thread but what was additive that came before the Moogs?

in the 70s, was it the Synergy that Wendy Carlos used for additive?

did the Fairlights have additive synthesis capability? that was why they had those plots of the harmonics on the green screen terminals, right?

that Technos Acxel resynthesizer would have been additive too after the initial analysis? i always thought that never actually shipped but it must have if there is one in the basement of that music store in Sweden!

any other additive synthesizers before the rudimentary Kawai K5? speaking of which, is there anyone out there actually using that software for the K5 that came from Quebec? i called them up once in the early 90s but my French wasn't very good and neither was their English - it was only a brief conversation to the effect that they were out of that business.

I'm not even talking about the Fairlight or Synclavier, they came long, long after.

kogmachine wrote:... but analog gave birth to VA, digital, hybrid, FM, additive, and all the other fancy new forms of synthesis. Didn't these newer forms come to be because of the first analog synthesizers?

As for the other ones, I'm not even going there.

I always thought that Moogs came out before the Fairlights but apparently I have to do more research. But compare a Hammond organ to the additive synths out now. Subtractive synths had so much sound editing capability and as far as I know Hammonds don't have as much. And I know that FM is entirely different from analog, but it did come after analog. It just my opinion but I don't see a big difference from an oscillator and an operator. Analog synths had LFO's and sub oscillators that modulated the sound from the main oscillators right? So I don't think FM is much different in that respect. I doubt FM would have come to be if the analog synth never existed. Certainly no one would disagree that VA is the child of analog and analog is at least half of a hybrid. Anyway thanks for enlightening me that additive came first, but my question remains, why do we see fewer and fewer new "real" analog synths on the market?

Here's your additive, the first additive synthesizer in the world: 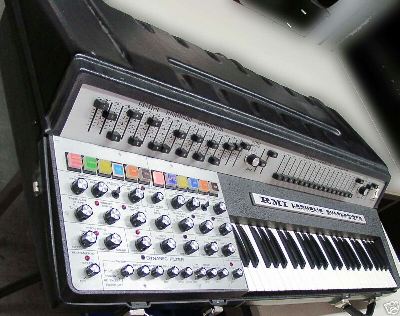 And to answer your question: Cause they cost alot to make and maintain.
Not to mention that what people really want is a workstation, a machine that does it all and has it all.
Just a synth - is just that, just a synth.

SubliminalEffect wrote:i don't mean to hijack the thread but what was additive that came before the Moogs?
.

Thaddeus Cahill's Telharmonium, and then the Hammond organ.

One could even go as far as saying that pipe organs are the same. They add harmonics to generate sounds.

I would like to post a couple of questions here, if someone could take the time to read them:

1) For those of you that have played it and messed around, was it really such awonder to play? Did the keyboard feel just like a piano, was that aftertouch so very good, and did those oscillators sound like none other?

2) Has there been one single synthesizer model since the CS-80 that comes remotely close to duplicating that synth's keyboard touch, aftertouch and glorious analog sound? (I hope it stripped away the turky elements that made the thing such a hassle to use.)

And, don't anybody dare mention the Arturia. I'm talking HARDWARE!!\
The greatest thing we ever have is the will to survive.

IIRC the SCI Prophet T8 and the Rhodes Chroma both have (suposedly) great weighted keyboards with poly aftertouch. Not that they are much easier to find (or cheaper).
Top
Post Reply
95 posts