clusterchord wrote:there just nothing else out there that sounds like this, none of the modern modular manufacturers, as good in their own right, evem ones going for the moog vibe, cannot pin down this elusive character. damn.,..,


This cartoon describes it perfectly:

But indeed, the lead sound is not a moog sound at all.
Top

Esus wrote:I used an NED PostPro (Synclav 9600 + 16 track Direct to Disc) all through the early 90s. The keyboard was absolutely superb. But I wonder what the difference was between the Synclav II and the black 9600??

For starters, the Synclavier II didn't offer sampling when it appeared back in 1980, the (mono) sampling option appeared during 1982.

But holy h**l, what did the Synclavier cost? The same as a midsized house?
Top

Eek! And still Orbital Decay has one in his studio. Scary guy.
Top

insky wrote:Only the sequenced line is the Moog. The lead is the Synclavier. I'm guessing it would be a little hard to get a Moog Modular to sound like a Synclavier. So it looks like when you finally get rich you have to buy a Synclavier as well.

phuck. i guess i really blurted on that one.. yeah i thought it sounded like a sample, but i was thrown off by style of playing, which i'm familiar with all too well, and have used many times too.. it sounded sooo good with the bassline backgournd.. instant rubycon/ricochet.. so i automatically went with "its all moog"..

insky wrote:So it looks like when you finally get rich you have to buy a Synclavier as well.

hahaha right u are. but im more a fairlight II-x kind a guy. if i had as much money to disregard maintenance/shipping and other problems id definetely get a fully refurbished one.. au contraire im actually toying with idea of selling my cs80 cutting down my vintage setup .. i just arrived at the point of "life is way to short" frame of mind.. aghh.. im 40 next september..

so whats the reverb on the lead, it sound very nice, ambient in a kinda retro 70s way.. ??

synthetic88 wrote:Mos-Lab is getting some good reviews online:

I'm starting to build a MOTM myself (again).

yes, MOS LAB sounds very very nice.. and..not sure, but form them demos not like moog. pwm is great but saw and esp filter it aint no 904. MOTM and Macbeth got the closest imo. im thinking MOTM too, but probably frac rac version if Paul decides to expand the line..

i remember your killer demo with a single VCO/VCF/VCA/ENV.. perhaps not moog character 100% but awesome, huge and very musical. in the end.. thats what's important. otoh, im waiting to hear the new Macbeth Factor X. if that sounds the way he says it s gonna sound.. i might part with a few grand..

Yeah, the MOTM stuff is very musical. And the full-size versions feel incredible. (They should, with $8 pots and $2 knobs.) As for Frac, I've heard lot of people go from Frac to MOTM or Dotcom, but almost no one who went the other direction.
Andromeda • Voyager • Super Jupiter + Programmer • TX-802 • Two GigaStudio PCs
http://www.jefflaity.com/studio
Top

clusterchord wrote:
so whats the reverb on the lead, it sound very nice, ambient in a kinda retro 70s way.. ??


The lead sound is actually two lines played at the same time. I'm playing the Sync II with my left hand. An authenic voilin sound with a fast attack. The Sync II runs through a dedicated Zoom 9050 with a touch of chorus, a bit of delay, and little reverb. With the right hand I'm playing a Voyager keyboard triggering via MIDI, a PC with several soundblasters. ( two goldfinch cards with Emu 8000 engine, digitaly connected to a Emu APS card with the Emu 1001 engine.) The sample is a Mellotron Flute I downloaded from J P Hoovercraft. (Nice sample) The Tron sample has been tweeked with quite a bit of the Emu APS reverb. The sound has a very slow attack and unlike the Sync II has velocity.
The combination of the two sounds played together, makes for the odd tone. At the begining it sounds like the violin, then the flute comes in behind it. There is also a delayed vibrato on the violin sound. The bit of slop playing the same part with both hands adds something too. I think if I could have MIDI'ed the two together, it would not sound the same. I playing an odd scale that adds to the vibe.

The Synclavier II is an original keyboard version from 1982. Ruinning release I/R it can play resynthesis patches, but without the mono sampling and terminal option, I can't roll my own. Equiped with 16 FM/additive voices, one 5 1/4 drive, two Morley pedals, and full flight cases, this one probably cost around $22,000.00 new. I does have a unique sound. Perhaps I will post some samples in the future.
Here is a photo of the setup I use live from the Stars End 30th Anv. spacemusic festival this past summer. 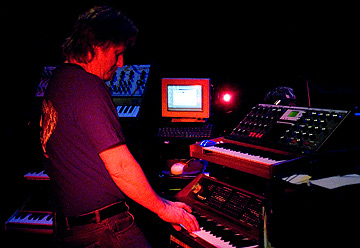 Here you can see the Sync II with the Voyager on top and the small B&W monitor for the PC with the soundblasters. To my left is a Oberheim Two-voice on top of an MS-20 and Indigo2. To my right is a rack with a Line 6 Echo Pro( For the modular) a Mackie LM-3204, three Zoom 9050's (One each for the SyncII, MS-20, and TVS) a Boss VF-1 (Voyager) and a Zoom 9010 for overall reverb. The modular we used for that show, was a combination of Minimoog/MOTM with a dotcom 960 clone. This comming year I hope to include the Moog 1P into our live setup. 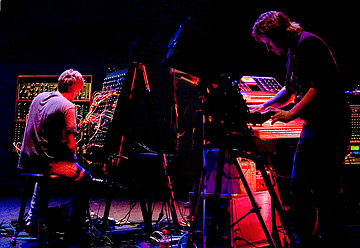