What instruments are Daft Punk using at the Grammys?

redchapterjubilee wrote:And I was surprised that so far there's been no mention of Jimmy Jam rocking the Oberheim during The Time's performance with Rihanna. Before footage could sweep to his side of the stage I thought "wow, those synth horn stabs sure sound analog" and I fully expected to see a Triton or V-Synth. But no, I could see it was either an OB-XA or OB-8 (methinks the latter because the the graphics were blue, but wasn't there blue OB-XA's too? Micke?).

i just looked at that on Youtube, embarrassingly bad. they are both OB-8 synths on both sides of the stage, the tell-tale sign is the cutouts in the wood endcaps, the OBXa doesn't have cutouts and the M12 only has them if it's mod'd; on the M12 those cutouts would be larger and the endcaps themselves would be more slender. on the OB-8 on the right, it has a compact cut-out which indicates factory MIDI. on the OB-8 on the left it has a compact cutout which is for individual voice panning. 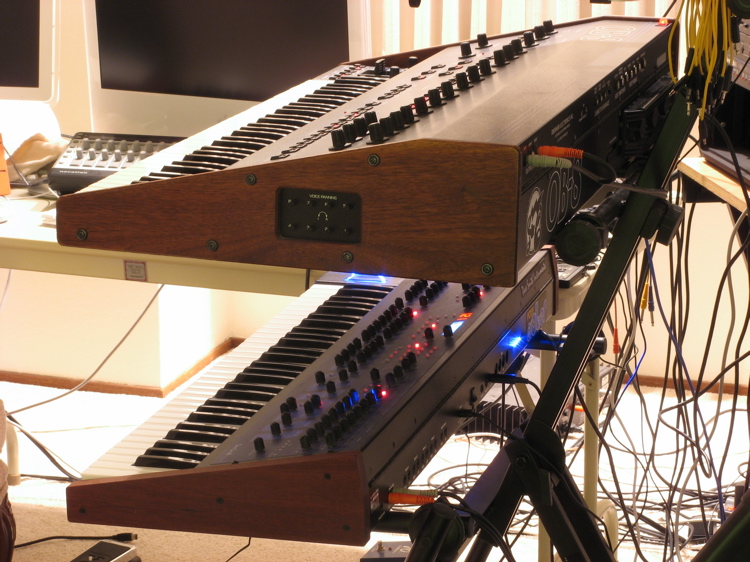 I could see the cutout but couldn't ever get a close enough look. I didn't realize the OB-8 was the only model with the cutout on the side. Still, I'm surprised that when I heard it I thought "that sounds analog, like an OB or a Jupiter" and I'm usually always wrong about that sort of thing.
http://facebook.com/greatunwashedluminaries
ANALOG SYNTHESIZERS + EFFECTS + COMPUTERS
Top

JUGEL wrote:Oh ,. and Justice is a lunchable version of French house... C+ to the max. You're music can only be as good as the substance... production only matters so much...

in regards to dance music? .. something a bit more infectious... can't just be all fireworks...
Top

you'd think the way some people go on about DF that they are the be-all-end-all of electronic music, they are not - they are garbage and only made one good album which was Homework.
| syn303.bandcamp.com | soundcloud.com/syn303 |
Top

You had be a little going when you said garbage... but then you followed that with the Homework comment. Totally agree... but I did like the Roule releasesas well. Last 2 albums are awful...

But from someone who loves pop music, there are a few daft punk songs that are excellent!
Moog LP + Casio SK1 and MT-75 + tube amp = good tone.
Top

But from someone who loves pop music, there are a few daft punk songs that are excellent!

Your second statement proves the first to be true!
Top

But still, there must be something in that, for a band to have some cross over appeal. I bought the Justice album and while it sounds cool there was only one song I liked on it, they just didn't have the same pop sensibilities as daft punk captures with some of their songs
Moog LP + Casio SK1 and MT-75 + tube amp = good tone.
Top

The Justice album would have been much more listenable if they hadn't tracked everything through a distortion pedal.

Seriously, it's almost impossible to listen to it the whole way through at any volume. My ears feel like they're about to bleed.
http://worng.bandcamp.com

I liked that about it, I liked the way it sounds even though it sometimes leaves me a bit cold
Moog LP + Casio SK1 and MT-75 + tube amp = good tone.
Top

tyrannosaurus mark wrote:I liked that about it, I liked the way it sounds even though it sometimes leaves me a bit cold

Yeah, from what I've heard of the album...the trashy sound was one of the only interesting things about it.
Korg Volcas / 6 x TE POs / MicroBrute / EH Space Drum & Crash Pad
Top

I liked it to begin with, but when you listen to the album the whole way through and it's unbearable by the end. There's no contrast at all, so the effect of it wears off anyway and you're just left with something that's difficult to listen to.
http://worng.bandcamp.com

I think Daft Punk honed their image from the 1977 group The Droids (Fabrice Cuitad) Check the video (do you have) The Force. I know the whole album is available to download somewhere.

But still, there must be something in that, for a band to have some cross over appeal. I bought the Justice album and while it sounds cool there was only one song I liked on it, they just didn't have the same pop sensibilities as daft punk captures with some of their songs

Yeah youre right. and its something I dont understand. .

their music is the most basic of sample rips with wacky filter/vocoder action, standard dance beats and simple synth lines.

Everyone says that what they do when they play live is so amazing, but at the very most, all theyre doing is triggering a bunch of clips in ableton live so that they can mix up the different loops from different songs, and possibly adding some live effects. . . then again some will tell you that they just fake it and its all just premade playback... Which wouldnt surprise me since I've heard a live recording of them from the other side of the planet which sounds IDENTICAL to the live show they played over this way...

I think everyone has just been 'blinded by the lights' so to speak.. which I guess isnt hard to do when they have so many of them.
Top
Post Reply
55 posts