what is your take on vector synthesis

what is your take on vector synthesis

has anyone here played a vector synth im interested in what they sound like and how it all works, i was looking at a yamaha sy35 it seems pretty interesting something like 350+ wave samples and you pick and choose 4 to mix with a wheel,but if im missing a bigger picture please let me know
Top

I've had the SY35 and it's not that special. You still need outboard effects, and the FM on the thing isn't as capable as it should be. They make cheap controller keyboards, I guess that counts for something.

You're probably better off with a Wavestation.
"Part of an instrument is what it can do, and part of it is what you do to it" - Suzanne Ciani, 197x.
Top

Vector synthesis is more of a marketing term than a real type of synthesis.

All it entails is taking 2 or more sounds and then morphing between them. Any synth that lets you create multi-layer patches and then modulate the volume levels of the layers can do it.

The Yamaha SY22/35 and TG33 really do FM synthesis and sample-based subtractive synthesis. You can create patches using up to 4 "elements", of which 2 can be FM and the other 2 subtractive. The joystick lets you control the level of the elements. You can either use the stick in real time or record the stick motion to create a vector envelope. If you don't touch the stick at all you just get the elements layered together.

Most modern ROMplers can do the same thing, in fact Yamaha still calls the patch layers elements in their Motif series. On a Motif you have a volume slider for each element for real time control or you can use a modulation source to control element volumes.

Many VAs have features like patch morphing, modulation sequencing, etc. that can provide vector effects.
I listened to Hatfield and the North at Rainbow. They were very wonderful and they made my heart a prisoner.
Top

I had a Kord Wavestation EX, and the vector synthesis is really nothing more than another way of influencing the mix between sounds - either automated or in real time. I hesitate to reduce it to the level of a gimmick, but it's not a "must have" or groundbreaking type of synthesis function.
Top

Excuse my ignorance but isn't the vector synthseis an added feature more than something else? I mean, the hardware controller is very important when talking about vectors

I mean, only a few synths can be considered to have a true vector synthesis, like the Sequential Circuit Prophet VS.

Lot's of crappy synths can do something similar, but not with the accuracy of the SQ VS..

I have the V synth, and I'm honest, I prefer a knob or a slider than its crappy touch pad.

Same for the Roland D2, is bassically a pseudo vector synthesizer.

mostly of romplers have 4 layers inside each pads, you can program to fade the volume of x layer, while the other one is increasing, and assign this to a knob, and then you have something similar to a Vsynthesis...
His sex dungeons are rumored to hold hundreds of people in secret locations around the world.
https://soundcloud.com/balma
Top

On SY22/35, yes - it's a gimmick, but on Wavestation it's a major building block. If anyone says otherwise, they not deserve having Wavestation
(tongue in cheek)

balma wrote: mostly of romplers have 4 layers inside each pads, you can program to fade the volume of x layer, while the other one is increasing, and assign this to a knob, and then you have something similar to a Vsynthesis...

I've always thought of vector synthesis as dynamic control of the mix using a dedicated envelope or LFO rather than manual mixing. Still, not that hard to do even if you don't have a vector synth.
Top

A tg-33 is the coolest cheap synth you can buy IMO. It's a total pain to edit and unisyn helps immensely, but you can get totally abstract metallic bubbley sounds that bounce all over. I think the VS is worth every penny, but I kicked myself when I only got $50 for my TG-33 on ebay a few months back. It's difficult to create a pre-determined sound with any vector synth and programming takes time.
Top

i'm a huge fan of vector synthesis- the Prophet VS is one of my favorite synthesizers as is the Wavestation (i use the KLC version of it). it's a very peculiar way to create sounds. the Prophet VS benefits from having a digital/analog hybrid design which gives it a distinct character not unlike the Ensoniq SQ series. along with the Xpander, the Model D minimoog, Prodigy and UltraProteus, it is a synthesizer you would have to pry from my cold, dead hands. eventually someone will again make a synth that is primarily based on vector synthesis. 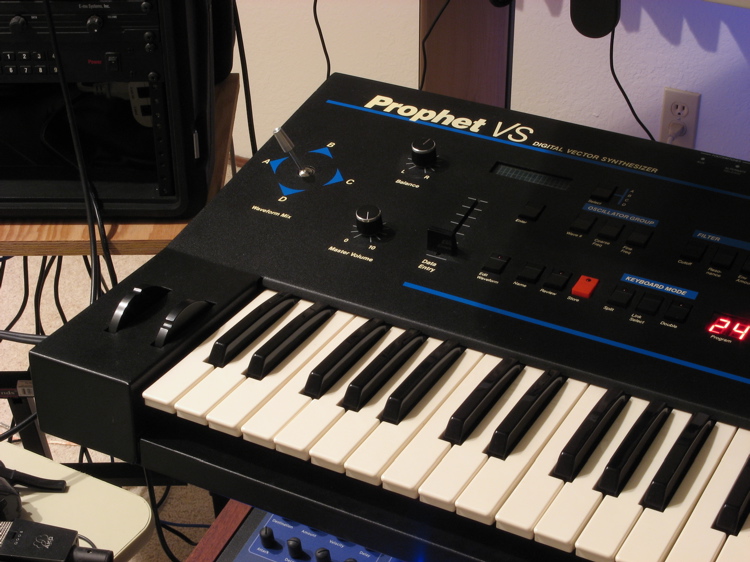 I had an SY22 for a while in 2007. I wanted to see what vector was all about and if it were something I'd like. I did enjoy the SY22, but I felt as though it needed "more". The FM section was like, 2-op and the PCM samples sounded too lo-fi to my ears. I think if I were to buy another vector synth it would be a Wavestation. That said, yes vector is fantastic, but I recommend something outside of the SY or TG line. (Although, since the SY35 was basically an improved SY22/TG33, that might be better than I realize) If there's one you can easily get locally go for it. But if that's not the case I'd save up a more for something more powerful.
soundcloud.com/vectron

xpander wrote:i'm a huge fan of vector synthesis- the Prophet VS is one of my favorite synthesizers as is the Wavestation (i use the KLC version of it). it's a very peculiar way to create sounds. the Prophet VS benefits from having a digital/analog hybrid design which gives it a distinct character not unlike the Ensoniq SQ series. along with the Xpander, the Model D minimoog, Prodigy and UltraProteus, it is a synthesizer you would have to pry from my cold, dead hands. eventually someone will again make a synth that is primarily based on vector synthesis.

that stick control at the left of the VS is the core of this synth. I think you can put a wave on each "cardinal corner" of the stick, like using coordenates x and y, and then you can really morph between the four elements.... I think this is the real vector synthesis...

Command station is a really cool rompler, if you dig into it, you can get amazing things from its patch cord section.
I have made some "vector patches" programmation, i just construct a default preset with the correct knob programming to make pseudo vector synthesis and save it and use it as a reference to build another patches. That saves a big amount of time programming....

there is a "fading" section (range 0-127)
that can be fully programmable and assigned to keyboard lenght, LFO1, volume, filter, etc....

I took those parameters, and assign one (or four knobs to have a more detailed morphing range) programmable knob to them, so while I move the knob, I travel throught the four waves, increasing and decreasing its presence while I enter the ranges of parameters where they become active....
His sex dungeons are rumored to hold hundreds of people in secret locations around the world.
https://soundcloud.com/balma
Top

I think the sy35 for what it is at that price point. The thing that bugged was TOO much control over envelopes. What the point of being able to record the joystick AND program four indepent envs? (it wasn't hard to ignore either because of the menu structure). Maybe it's just me, but I couldn't be bothered programming 4 seperate (and detailed) envs. but you can get around it with the joystick.

Anyways, I think it sounds great and lo-fi... Being able to record the movements of the joystick I don't think most other vector synths can do (you can't do it on the VS right?)
Do you even post on vse bro?
Top

I like vector synthesis as a real time control feature - I'v used a wavestation as a controller for an fs1r and the joystick works well with the fs1r patches. I take an SY22 gigging sometimes, because its light and not valuable. But the basic sounds are a bit muddy. I run it through a frostwave sonic alienator, which adds some nice grit and filter control and with the vector joystick it becomes a very expressive instrument. . Wish I had a prophet VS though!!
"On the following day , the sorcery undespairingly continued: I changed my series, chose other sequences, cut other lengths, spliced different progressions, and hoped afresh for a miracle in sound." (Stockhausen)
Top

Alesis micron is capable of both vector synthesis and wavesequencing. Really, any VA or analog synth with >= 4 part multitimbrality and assignable midi cc to part levels can technically acheive vector synthesis (see caveat below). If the joystick is a prerequisite, a controller such as bitstream 3x will complete the scenario. I doubt this would be effective with my six-trak, since it will freeze up with too many simultaneous controllers coming at it, and four is probably pushing it, but I might try it just to see if every synth I own is vector capable.

As usual, romplers can go much further in this regard, since many (like aforementioned command station) can do this within one patch using layers so you don't eat up so much polyphony.

The caveat to this: a genuine vector synth allows a per note mix envelope to be part of the patch, whereas in the above scenario, a pattern based envelope would be easy, but it would be difficult, if not impossible in many cases, to make the mix envelope the same for each note played. Micron can do this too, though.
Top

My take is that it is cool with the right source material. Camel Audio Alchemy can do this and it sounds fantastic. My Novation SL controls the vector fade groups and the sounds are simply stunning.
"MTV's gaudy overexuberance contributed to the trivialization of the one thing it had been initiated to support, music" - Rik Millhouse
Top
Post Reply
15 posts • Page 1 of 1