Why doesn’t the OB-8 get more love?

As you've said the topic is comparing the P5 rev 2 with your OB-8. And that the sound drop off isn't much. Sometimes I've thought of getting a Jupiter 8 but is it going to be 5000 better than my other synths and polys. Probably not. I have a JX10 and PG800 which while not in the same league as the Jupiter 8, fills my pad needs more than adequately.
Serge/Modcan A/MOTM/Frac/Phenol/Andromeda/Jupiter6Europa/OctaveCatSRM/ARPSolina/ARPPro Soloist/Pro2/Korg770/Juno60/Lambda/Anamono/Little Deformer/Integra7/Microwave1&2/Syncussion/FS1R/Microkorg/Xoxio/VL1M/JD990/MKS50/TX816/DSS1/KARP/TG33/OCoast/SC40
Top

madtheory wrote:Does the OB have oscillator sync, and noise mod of the filter?

The OB-8 does have oscillator sync. Interestingly it does have noise mod but only to the oscillators. It has 2 LFO modulation sources on the main panel and a 3rd on the performance control box (where mod wheels usually are). The 3rd has noise but that modulation source is for the VCO's as I understand it so far...

One other minor strange thing is that the noise source is either on or off. It's not a big deal for me because I usually only use noise for sound effects or rhythm sounds but if your big on noise sources and being able to control the noise amount it might really bother you. I imagine it would be a difficult mod to fix. I've seen the some people have modded the OB-8 to use the noise button to switch on a HP filter.
Last edited by otto on Thu Apr 09, 2009 5:05 am, edited 2 times in total.
hello darkness, my old friend
I've come to talk with you again
Top

It's funny you bring this up, I was just having a very similar discussion last night with a friend of mine. I am not sure i have an answer for you, as the OB-8 seems like a great machine to have. Everyone talks about the p5, the JP 8 and when talking Oberheim, the OB-Xa.

To my ears the OB-8 should be more highly regarded.
Top

I was just reading over that endorsement list... what in the blue h**l did Molly Hatchett do with a P5?
Switches, knobs, buttons, LEDs, LCD screens, monitors, keys, mice, jacks, sockets. Now two joysticks!
Top

While there's a lot of overlap in the sound of these two synths, they feel very diferent to me. And that alone makes me play different stuff in each. I'd say the p5 fells more organic, and the ob8 is a more full featured synth. Ehe

I love the fell of the knobs on the P5. The knobs and the keyboard are kinda crappy on the OB8(mine is the non-j-wire, whattchacallit again?). The OB's arpegiator is a lot of fun! They both sound great tho! In terms of bang for the buck I tottaly agree that the OB8 is a better deal. Great pick Otto!
Minimoog ModelD Prophet5 Roland Jupiter8 SH7 GR9 CSQ100 TR606 TR707 TR727 Oberheim OB8 ARP2600 KorgVC10 Rhodes73 Wurlitzer 200A ClavinetII DOTCOM PearlDRX1 TamaTS202 Simmons SDS9
Top

i bought two OB-8s about a year & a half ago (the second was thrown in for an extra $300 "for parts"). i wasn't thrilled with it right off the bat & they both got shelved. however, i decided to fix up and sell the "for parts" one and in testing it out really, really connected with it- the one i've kept has been set up ever since and today is easily one of my favorite synths ever- beautiful sounding instrument once i started programming lots of patches. i still like the Xpander more but find the OB-8s limitations and polyphonic-centric interface to guide my patches to a certain character which is pleasing to the ears and extremely classic sounding (80s analog sound). 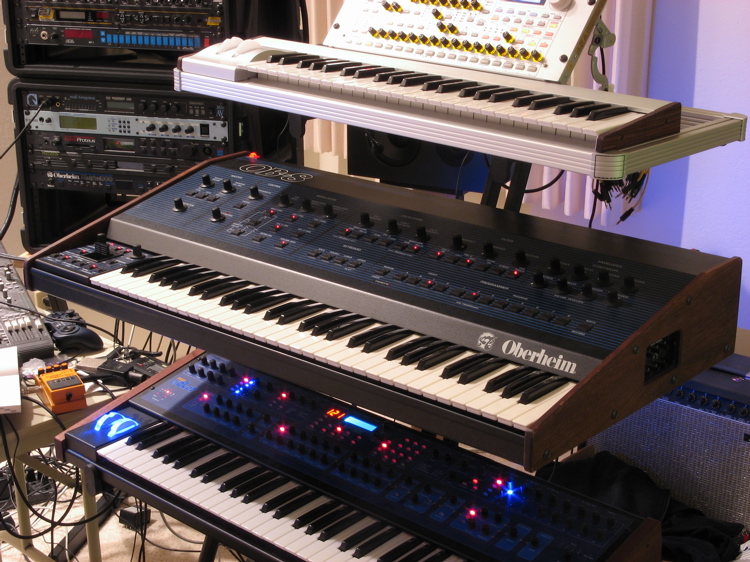 OB8 is such a wonderful synth. There was so much to discover for me when i got mine, because there are so many features that arent even obvious that i really had to RTFM for. (I dont have page 2 silkscreening) The mod section confused the h**l out of me at first, but I totally get how everything works now. I like how the mod amount and rate knobs 'pull' up to latch mod on and if you hold pitch bend up and pull rate up it changes the lfo2 shape depending if its up, down or in center. When you use the noise or S&H latched on to affect the osc 1 & 2 you get even more interesting sounds when messing about.

I cant even begin to explain how much i love the arpeggiator on this thing. Its almost like having a sequencer built in when you program transposes and then add a split where the upper volume is off or low. You can gate certain notes out with the volume balance if your arp is played between both upper and lower. Add sync from the kenton box and you are in arpeggio bliss.

Heres the funniest part some of you may find hard to believe, after i went inside and increased the resonance trimmers slightly ive been able to make this machine sound almost exactly like my sh101. Its so identical i could probably make an A/B test and you'd all fail!

This machine is definately a powerful machine, and does have many sweet spots. It has a very special sounding triangle, and I love the square without pulse. Very sinister sounding square.

Talk about an endorsement.

Yeah but the OB8 had Dennis DeYoung and Eddie VanHalen!

f**k this place. (thought I'd make it a quadrilogy of UK disgruntlement)
I didn't get where I am today by posting on internet forums.
http://www.myspace.com/thegreenalsatian
http://www.soundclick.com/greenalsatian
Top

f**k this place. (thought I'd make it a quadrilogy of UK disgruntlement)[/quote]

Yeah but I assume you’re comparing OB-8 prices from a few months ago to P5 prices right now, they both have come down. You wouldn’t get $2k for an OB-8 right now. Looking at current ebay auctions $1500-$1600 seems average. I think working rev3’s go for $2500+ (even broken around $2k). That’s about a $1000 difference +/-. I paid half the selling price of my P5 for the OB-8 but it was a rev 2 so it’s not exactly a fair comparison I guess.
hello darkness, my old friend
I've come to talk with you again
Top

The OB-8 was good enough for The KLF, they used it on every record they recorded. From their first Pure Trance 12" single "What Time Is Love?" made with just the OB-8, TR-808 and a Sampler. Right up to The White Room Album.

madtheory wrote:Does the OB have oscillator sync, and noise mod of the filter?

The OB-8 does have oscillator sync.

Thanks otto. I always assumed that the OB was a little more limited than the P5 in the mod department. Seems it's just "different".
Bandcamp
Facebook
Soundcloud
Soundware Shop
Top

I can't talk from experience, but it just kind of seems like ob8 is the last on the heap in terms of the oberheim polys (and also some others of that era). This isn't to say that it doesn't sound good-from what I've read, and from what you're saying, i'm sure it does (and I'm always a few clicks away from buying one!), but given that it's not as raw as the obxa or obx-and not as vast as the Xpander-and that's probably what people (or at least I) want from an oberheim, it sort of gets left behind. I keep hearing it described as smooth, lacking some of the low end... more tempered, blah blah blah... I know I shouldn't read into that, but it is kind of a turn off, especially when they are still only a few hundred less than an obxa or obx. It's interesting hearing they are similar to the p5 3.3...

What I'd like to hear is a comparison of the ob8 next to xpander, just so I can convince myself they are too similar to be worth having both!