haha he plays it for exactly 10 seconds in the whole video... sure looks purty though.
Top

My favourite part of that video was the bit at the end where he looked up at whoever was about to murder him.
Come on Bennett.... Let's Party!
Top

i wonder if the JP-80 can hold ARX expansion boards? if so, that might be a ray of light for the Fantom-G owners annoyed at the lack of ARX offerings.

its a damn nice looking board. not really my cup of tea but i think it looks and sounds very nice. its a different take than a "me too" workstation - its a true performance board. since i can't play for s**t, i clearly don't need it

switching to cynical mode - i wonder how many bugs in the OS? "the pitch bender doesn't work if you play any notes outside of the middle octave but we won't be fixing that in a future OS update because we're too busy making the Jupiter-90"
Top 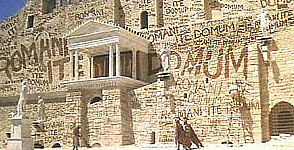 "I'm sorry, could you say that again?"

"Oh, German! I'm sorry, I thought there was something wrong with you!"

Well, I'm not going to go on an on about it but this is a bit of a dissapointment.

I can deal with the fact that they named and styled it after the Jupiter 8, but what really isn't great about this is the apparent lack of control. One of the best things about the original Jupes that really made them popular in the first place is both the great logical layout and the amount of sliders and knobs. If there was only *one* single thing they should have taken from the originals it is this. Sorry but control is a massive part of live performance, if this indeed is a full blown synthesiser as reported and not just another rompler then it is lacking this vital aspect IMO.

What good is a potentially awesome new synthesis type if there is relativly nothing tactile for you to shape you're sounds with.

Apart from that it looks like it does have potential, shame...
Top

Long HoJo Jupiter-80 interview and demo at SonicState, do watch:

HoJo on the Jup-80, from Roland Channel:

Howard Jones is desperately trying to find ANYTHING good to say about this thing. I couldn't watch that whole vid... it just makes me cringe.
Monkey business since 2007!
Top
Post Reply
256 posts