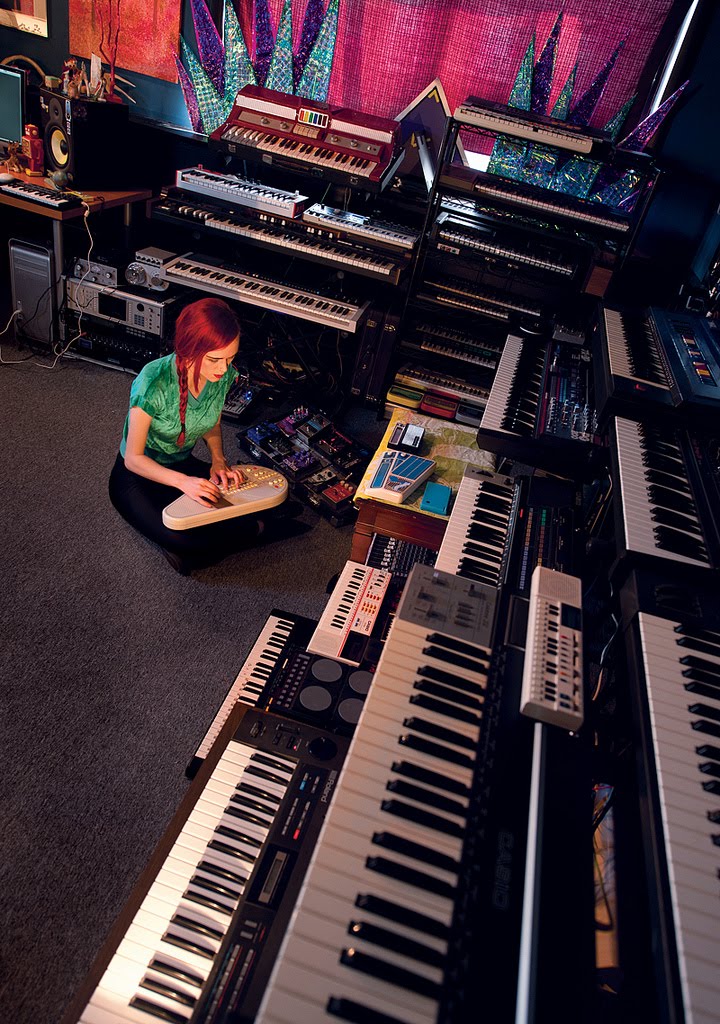 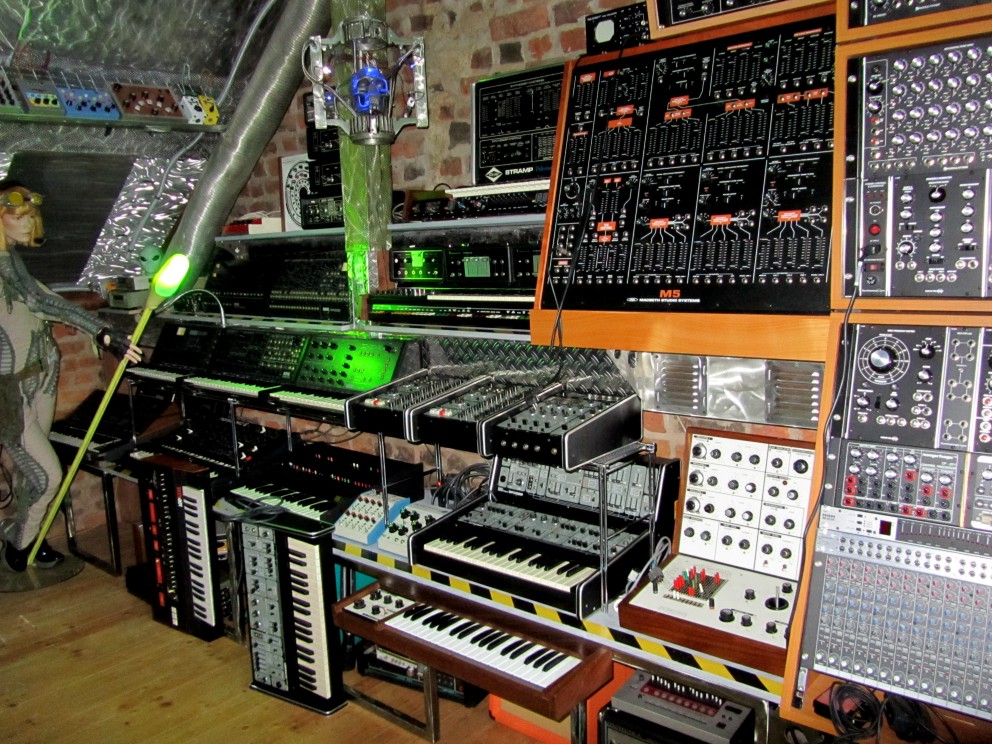 what sort of emotions run through you? Awe? Envy? Some folk may even think, if they don't like the music these artists are producing: "They don't deserve these setups, i could do so much with that stuff!" Which is a very bitter stance to take in my opinion.

The reason I ask is that, maybe years ago when i was a hormone-fuelled heady adolescent, i may have had one or a few of these negative reactions, but now, I'm starting to realise that i'm quite happy with my modest setup. I have most bases covered:

I've acquired raw waveforms from Roland LA and some Wavetable synths which i can mangle through the Fusion.

Most importantly I'm finding that the music I'm making doesn't at all suffer from not having a massive wall of synths. And i'm finding cheap ways of getting my GAS and "New Sound" fix, for example, i'm collecting a few Yamaha Portasounds, learning to circuit bend, modifying some of my current synths (moog slayer next!), and being generally thrifty.

There are a few things i'd like. A proper Anaolgue monosynth like the CS30 or 20M would be great for true, dirty analogue sounds, and will probably be my next purchase at the end of the year, if i can find one. Also, soviet synths seem very cool, and there are a few other pieces i wouldn't mind trying out, e.g Juno 60, JX3P, Waldorf Stuff, ESQ1, Z1, SK30, but i don't NEED them to be happy, or make good music. The obsession levels have decreased incredibly in the last few years.

I'm actually pretty happy, maybe i'm kidding myself, and having a wall of synths is the greatest thing ever, but hey, my addiction is under control, and my musical life and personal life are nice and balanced

I find that it's better to have just a few machines rather than many. You get more focused on the actual music with less equipment.
Top

That was another good point i think, and may cross over into the "challenge of simplicity" thread, but i think that with a load of synths, i'd spend a LOT of time making patches and cool sounds, filling up them patch banks, but not as much time actually working on tracks!
Top

Well, it certainly looks nice for visitors. But that's where it ends for me. Practically speaking: I have a large mixing console here, the size of a single bed. In terms of features and scope it can't even sit in the shadow of the raw horsepower and comfort my PC offers. Same with synths: they may offer a knob/fader, or twenty of 'em, but otherwise they are technically limited. I mean, I won't ever get 64 voices out of my JD800, let alone having multiple instances of a JD800 with a mouse click. So, seeing all this lot tells me 'Hey, a fanatic collector, this place would make a nice visit on a rainy Sunday afternoon!', but in terms of practical production methods I'm not moved an inch by it. But, if they like it enough to do something fruitful with it, they have my blessing..
"You know I love you, CS, but this is bullshit." (Automatic Gainsay)
s: VSL/FM8/EWQL/LASS h: DX7/FS1r/VL70/SY77/SN2r/JD800/JD990/XV88/Emu6400/Poly61/Amek35:12:2/genelec1030 r: Violin/AltoSax/TinWhistle c: i7-4770/RAM32GB/SSD
FM8 vids
Top

Don't get it anymore. Only envious of the talent of the people who use the setup.

Though a special exemption can be made for Zimmer's wall filling modular and frankly gorgeous room. CS_TBL wrote:but in terms of practical production methods I'm not moved an inch by it. But, if they like it enough to do something fruitful with it, they have my blessing..

I find myself bothered more by people who gain tons of success off little work, than people who are lucky enough to amass a pile of respectable gear. I might respect Ke$ha a bit more if she had a Moog Modular, but it'll still get me peeved when Lady Gaga's producers, with their budgets, use vengeance loops.

But I'm young, I've got to play up my final year of teenage angst.
Top

Yeah you'll find yourself chilling the h**l out by the time you hit your late 20's :p
Top

I never had the jealousy or envy reaction, but I do know some people who get upset and want to rank on the music of the people who have big set ups. Or harp on the fact they are not major stars in some cases. When I first started building my set up, there was a sense that with every new purchase my music was indeed getting better. So I can see the false idea that the more you have, the better you must be/sound.

I did entertain that 'some day' thought about a mountain of gear or owning every piece I'd ever idly fantasized about.
Bet when it comes to actually making music, you don't have the sonic space for all that gear. I tend to not want to walk around my studio to make music and have everything that I need close at hand. It's like watching the big game and keeping the beer in the fridge and having to get up for every beer.

When I was younger and started getting into Synths (Early 80s) I lusted after gear that I couldn't afford and I was definitely one of those who thought the latest piece of gear would change my life and give me the break I needed... it didn't... mainly because I couldn't afford it.

Now I can afford the some of the latest gear but instead I've bought some of the stuff I lusted after as a teenager and I'm thoughily enjoying a return to my childhood. I have a reasonable amount of kit but it's accumulated over time and not in one big hit, more like lots of little hits. So I have no problem with people who have large set-ups, and I love seeing what other people have and how they use it. Some of these set-ups are in commercial studios so they are trying to make a living by offering as much cool kit as possible and good luck to them. Unless I was doing the same I'm never going to have that much kit.

Thing is though... I produced more actual songs/tracks with less gear and I pushed the gear a lot more and experimented a lot more whilst waiting for the latest gear to become affordable. Although now having a family with two young kids doesn't help either as I have little time to put something down that has a start, middle and an end so it's all just messing about for the most, but it's nice letting them play with some of the kit and seeing them freak out at the weird noises.

Bottom line is it doesn't really matter how much gear you have or have not as long as you enjoy it and get a buzz out of using it for whatever purpose, hobby, business or dreams.
Top

Thank God I'm now over it, yes used to want all this s**t been though it and now realise I could happily do without most of my gear and still produce music I'm happy with - seriously.

You guys seem to have a similar point of view now, all I can say is - well done, some people never stop being envious and bitter and it only ever does you no good and will get you nowhere.

Careful, you'll soon realize that lust for that goes too- when you get that 'perfect set up'.
You know, doing more with less, er so to speak.

I know when I first started getting in to synths I used to envy people with nice set ups etc.

However now after years of buying and selling and actually using the gear more I sometimes pity people with massive rigs.

I have started to enjoy making music with a small setup that covers the sounds I like and can produce results that are more than acceptable to both myself and most people, h**l I even get paid to do music these days!!!

I think people get caught up with getting more gear and that if they only had synth x their music would be so much better or they worry about making the sounds that their musical heros make rather than just making their own music.

I like simple and stripped back now, it is creative and easy to manage and that is very important. It is funny seeing people with 20 or 30 subtractive synths, just how many do you need???

What in the h**l is that thing hanging down in the second photo? A lantern?

Truthfully, I wish I could take all the synthesis and sampling features from the synths I like and jam them into one double manual keyboard. Having to clean/dust/maintenance all those synths would be an absolute nightmare.

Obviously, people like what they like and I really don't care, but my pops has a hoarding problem, and I can say quite honestly the more stuff you own, the more stuff owns you. (Except FX, which are all kinds of fun to amass

)
Brains can be used like a "stress ball," but only once.
Top

I think people get caught up with getting more gear and that if they only had synth x their music would be so much better or they worry about making the sounds that their musical heros make rather than just making their own music.

It is funny seeing people with 20 or 30 subtractive synths, just how many do you need???

Ever see someone explain what their 20 keyboards are for.
I use this one for ARPs...
This one is for Bass...
This module does drones very well....
I got that for leads.....
That does pads well....
Sometimes I need to use a modular... sometimes...
This one is easy to program....
That one was a steal....
I always wanted one of those.....
Music Product: Better Sounds for Beats http://www.StudioAVX.com
Music Production: Resources and Research http://www.ProducersEdgeMagazine.com
Music Produced: Abstract Hip Hop Sci-Fi: http://www.TheDynamicUniverse.com
Top

I have been there, I needed my Synthex because Jarre had one, and my OB8 because I wanted Oberheim. Why did I need 4 Kobol racks? Well I got offered them. I bought my Syrinx because I found one and had the cash. I wanted a Q+ because it was new and nobody had one, plus with my Microwave XT, Pulse and Microwave it meant I had more Waldorf gear.

It gets out of hand very fast and I used to spend hours flicking through sounds or tweaking, hardly ever composing or recording or gigging.
You always want just one more Synth!
Top
Post Reply
142 posts