What was your first Moog?

My first Moog experience was the MG-1 as well about 6 years ago. Even as simple as it is, I was instantly enamored and knew I had to have a Moog. Fast forward a few years and I bought a Moog Voyager Signature Edition, which I absolutely love.
-|- THEO - modern prog rock-|-
-|- In Memorandom - electronic/ambient solo CD -|-
-|- organissimo - jazz with soul -|-
Top

My first Moog experience was in January 2008 with a LP at the Guitar Center in Albany, NY. I've greatly familiarized myself with it since then because there's one at another Guitar Center right near my college in Pasadena.

In the case of the LP, it's the Nord Lead of modern analog monos. It's hand made, very expensive, someone new to synthesis can sit down in front of it can get going right away, and what we lose in flexibility is made up for in a practically unrivaled timbral experience. Sometimes it makes me frustrated, but sometimes I really don't mind and embrace the sound instead of worry about what it doesn't let me do.
soundcloud.com/vectron

LP here...I feel similarly about it as Alex E...I sometimes wish it could do more, but as some of my wishes are granted in upgrades, I just don't use them because they are hidden in a really annoying menu...
Top

I didn't like the menus either. And I don't know why, but I can never find the portamento time parameter. I mean, it should be easy to find but it isn't.
soundcloud.com/vectron

MG-1 I bought last year off of E-bay for $300 shipped from the original owner I think. It came with the original box and manual and is in great shape. In my opinion, its bass that it can generate is "rounder" than the other synths I own and I think the only reason I would sell it is to perhaps get another Moog. I definitely like it. I love sending it through my AD-202 and ADL-100 (triple chorus) at the same time.
Top

First Moog here was a micromoog which I got pretty cheap, needed some work but sounded incredible. Later got a multimoog and when a trade opportunity came up the micromoog seemed to be the redundant synth to keep. Got rid of it, still miss it... but its slightly different than the multimoog and to me sounded better. Just a couple weeks ago I picked up a Moog Opus3 whose sound really grew on me after doing a repair on one. I now think its the nicest string synth out there... such wicked brass and chorus.
‹‡›
Top

I'm lucky to say that my first Moog was the modular that you see in my avatar photo.

I was a grad student, and a friend had phoned me to tell me that she saw an ad in her musician's union newsletter that simply stated "keyboard for sale" along with a phone number. She said she "had a feeling about it" and that I should call. And I did - mostly because I didn't want her hounding me.

When I talked to the lady on the phone, she had explained that her husband, who had been a retired orchestra conductor, had passed away. She was selling a Moog that he had purchased new a long time ago.

I asked her to describe it to me, and when she explained that it included two big boxes and that it required a lot of connecting wires to make it work, I got very excited/nervous/anxious. At that point in my life I had acquired a few other synths (AX60, Juno 106, etc) but nothing like a modular.

That same day I borrowed my parent's car to drive the 30 minutes outside the city to take a look.

When I arrived, I could hardly walk from my car to the front door. My heart was racing. She invited me in to the kitchen where we sat down for a cup of coffee. Although the curiosity about the Moog was increasing at an alarming rate, we ended up talking for quite some time about her late husband and his work. At some point the conversation turned to the environment because her husband had been very interested in the subject. I explained that I was a botany/zoology grad and was currently working on my masters. I would find out later that this connection definitely helped me out... a lot.

We finally got around to taking a look at the Moog, and when I first walked into the room and saw the keyboard sitting on top of the two portable cabinets, I was in disbelief. I remember that there was a big bag of patch cords sitting on the floor as well, along with other documents that included handwritten notes by Bob Moog. After the initial shock, it probably took me about 30 minutes to figure out how to connect the two cabinets and the keyboard. And another 20 minutes to create the demo patch and get a sound out of it (images of the note from Bob and the patch sheet included below). 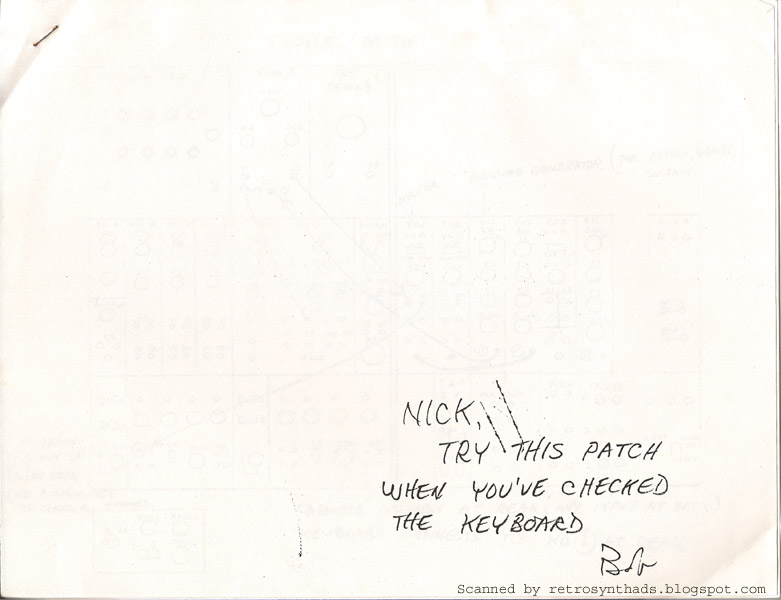 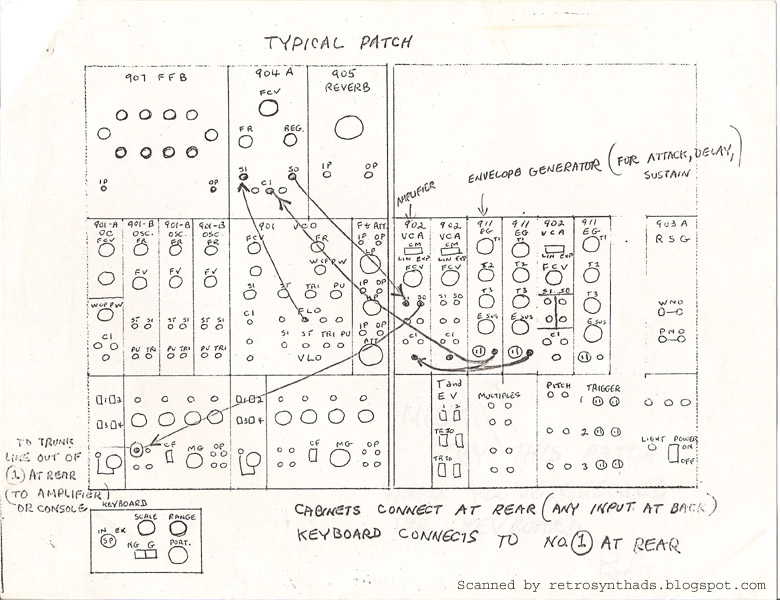 The only word I can use to describe that first sound I heard through the crappy little headphones I always brought with me to test synths with is - "confusing".

After years of Moog build-up by others in my city, on Analogue Heaven, in rec.music.(makers).synth and through chat room talk, listening through those little headphones is almost shameful. The first time anyone listens to a Modular Moog should be when it has been tuned up and plugged into a decent studio system. And at a decent level.

Not through crummy headphones. Definitely not.

But, I immediately said yes to her price (which she later admitted to reducing substantially at the last minute because I had so much in common with her husband and we had connected so well). I told her I would come back next weekend with the cash.

And, as part of the deal, she also offered me the decades-worth of Scientific American magazines her husband had been collecting for years. She thought (and was correct) that I would have more use for them than she would. I eventually donated them to my grad lounge but not before I read through each and every one of them (those early cigarette ads are priceless).

I was so scared it would be gone when I returned, I almost didn't want to leave. But when I came back the next weekend it was still there. And we ended up talking for another two hours.

We continued to keep in touch for a number of years afterwards until she passed away. Amazing how such a wonderful machine can lead to such a wonderful longtime friendship with a wonderful person.
d**k Martini
If you are bored... check out my blog: http://retrosynthads.blogspot.com
Top

That is amazing, Retrosynth. Congratulations on the experience!
Top

Not nearly as epic as that modular story (!!!), but my first experience with a Moog was with a friend's Prodigy a couple years ago. At the time I had just a Juno 6 and a SCI Prelude. I remember being really confused by its layout, kind of getting the hang of it, making some recordings, then giving it back. A few weeks later, I listened back to the recordings - DAMN, that thing sounded great.

Shortly thereafter, I had to own a Moog so, after some heavy research, decided I wanted to try the Voyager Old School. I found one a couple states away, exchanged some emails, and made the drive with my wife. It belonged to a really nice older gentleman. He had purchased it brand new to fulfill a childhood fantasy but never got around to really using it. He demoed it for me and I made a connection to it instantly. It came with original flight case, dust cover, patch cables, footswitch, expression pedal, AND a CP-251. For a song.

Although it sounds different from the Prodigy, I thoroughly enjoy it to this day!

There is definitely something spiritual about these devices and, obviously, the man who created them.

Alex E wrote:I didn't like the menus either. And I don't know why, but I can never find the portamento time parameter. I mean, it should be easy to find but it isn't.

Being in the middle (furthest reach for either hand) and so far from the glide on/off button contribute to where's the port time syndrome. I highly recommend a knob job MIDI controller like a bcf2000 or such to open up those menus. It is also absolutely needed for performance to deal with the buttons that cycle through options, unless you just play a patch with the keys, wheels, and expression pedals. I most enjoy a sequencer playing the notes while I alter the sound. Being able to jump back and forth for LFO source/destinations and OSC octave settings (4' back to 8') without cycling through can only be accomplished with MIDI CCs.

Automatic Gainsay wrote:I bought a Micromoog from Chris Youdell in 2001 or so.

Spoke to Chris a fair amount over the years as his mother lived in Nottingham, UK which is 20 minutes from where I am based. He always had a few nice synths around

Many nice stories, but RetroSynth's realy stands out. Im happy for him

The first moog I played was a friends micromoog. Later he borrowed me a Source, and I loved both synths.

Even later I borrowed an Model D from him, when he got his second (and third

) and missed it al the time when he got it back. Since he's very good person he then let me buy it on instalments.