The obsession for the Analog

..with the risk of a never-ending stream of words..

Electroluver wrote:It's a lot like a dog whistle. You can't hear it, but it's there.

If I can't hear it (or detect its presence otherwise/visually), I can't be bothered about it. It's a bit like bragging about your 4000x3000 photos, when you're viewing them on your 1920x1080 screen. In the end, the music will have to fit a CD/DVD, which is bit/freq limited. But, great that you can sense a dog's symphony in an expensive, acoustically sound-proof lab!


I'll take this a step further; Buying a midi controller and relying completely on software doesn't make for a good musician.

Thanks! I'll keep that in mind, the next time I'll make a 35 part piece o' orchestral music, full o' counterpoint, and properly orchestrated.

Perhaps you could address the 50.000+ media composers around the globe as well, they're obviously doing something wrong, and my fellow music tech students from 1997-2001 were obviously not musicians (yet they were bachelors/masters in music and arts, but hey).

It detracts from the artist ability to create listenable music, because they're conforming to societies expectations.

What does society care about how something gets made? If I compare my current tools (all in the box) to whatever I was using in the early 90's.. well I just work 100x faster now and have thus more time to experiment, fine tune and optimize whatever I'm making. I'd say that this contributes to better quality. Oh, and society can kiss my a*s as much as they like; I'm in control of my work, not them! Besides, in all the years making music for radio, tv, film, games and commercials, no one of those producers/directors has ever asked me about my creation methods. Never. The only thing they need to know is whether I can create xyz, and deliver at date abc for pqr money. As far as the importance wasn't already zero, the audience cares even less, and why should they care?

That all depends on whatever its users are expecting. It would certainly be mundane for me; I want full control over the smallest details, be it sound, volume, pitch, location, anything. The traditional pack o' ~20 parameters won't cut it for me, but it might for others. You know what it is? Only from a tower you can claim you've seen the broader bits of the land. If you remain on the ground your world is a lot smaller and you can not imagine whatever there is to see from a higher point. To use a math/dimensions analogy: a two dimensional person that doesn't know about the existence of a third dimension doesn't know he's flat and as such doesn't long to become three dimensional.


, but it's the difference between listening to raw 1's and 0's vs. Sine/Saw/Ramp waves that have been converted to 1's and 0's.

Electroluver wrote:I'll take this a step further; Buying a midi controller and relying completely on software doesn't make for a good musician.

I thought the analog vs digital debate was all about sound. Now having expensive synths makes you a better musician?

If you can't make great music with software synths, that's a problem with your musical skills, and no amount of analog can fix that.
Top

Zombie thread!
Like the photo with the 70's setup versus the 10's setup. Remember being told in the 80's how limited my Minimoog was with no memories, monophonic, obsolete. I was almost alone in thinking the new technology did not replace the old, but could complement it. Never thought I would ever see the day where people started playing these obsolete machines again along with the new. Glad the dark ages of the late 80's are over. I never did give up my Minimoog in all those years, but played it alongside the newest latest technology of the time. There is no replacement, only options.
My old and new setups. Still playing those descrete circuit analog synthesizers though.

Ashe37 wrote:Funny how your 2013 rig bears a resemblance to the previous pic's 1977 rig

Guess I haven't changed much!

It's easy to forget how far synthesizers have advanced since those 70's. No MIDI, no affordable easy recording. Magnetic tape and good recording equipment was expensive then. And just layering two keys together from one manual, required a custom modification. Remember reading how some well known artists had an extra buss bar installed in their Hammond organ so a Mini could play along on the top manual. And thinking just how cool that would be!
My new setup has a Roland MIDI controller with a seperate instrument on every MIDI channel. It's old but does splits and that cool layering of two synths on one key. Fun to remind myself how out of reach that was in the 70's as I play a Moog modular lead layered with a Hammond or poly-synth patch.
But with some of that smaller new technology tucked away, it still has the look from the 70's.
That is a live rig, minus the Roland 100M on top. Folds up and sets up easy, the best of both worlds with vintage and modern synths. 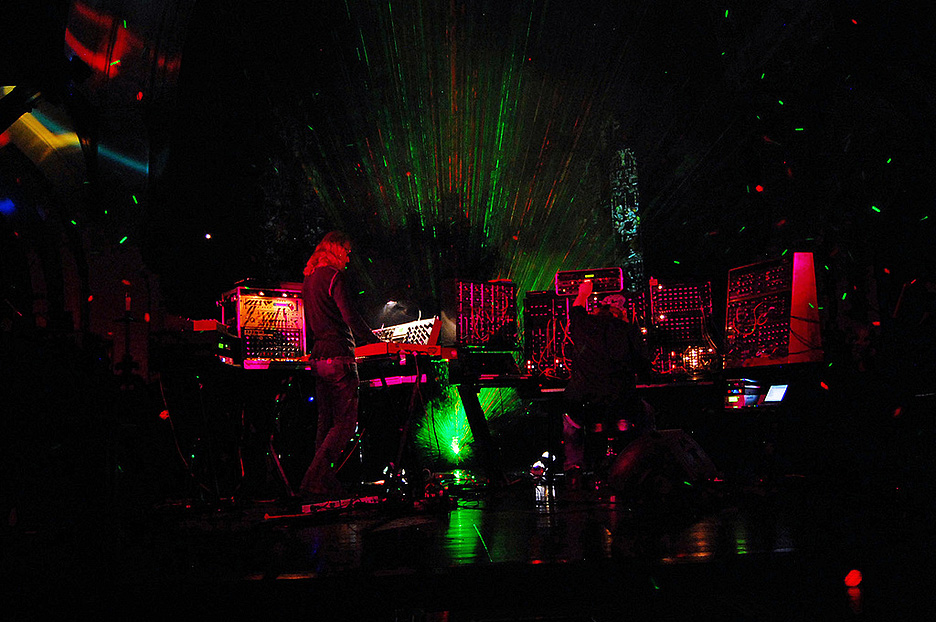 What Roland controller is that in the modular pic?
Top

That's a Roland MKB-1000. It's an 88 wooden key. No aftretouch, very basic MIDI, note on/off, velocity, sends on two channels with assignable split/layered/single, all saveable configurations in 128 presets. But the action is really nice and very fast. Played that CS-80 for years and thought it was a bit overweighted and slow despite the great poly aftertouch. Heavy solid unit, built like a tank and doubles as a modular stand.
Top

The analog fetish is partly reasonable and partly not.

Really, if you have a good analog monosynth with the ability to run things through the filter, you've got most of the analog you'll need. VA's and digitals are more than sufficient from then on.

VAs and Digitals also have abilities which analogs usually don't... the Access Virus, for instance, is a brilliant MultiFX unit.

Of course, it varies a bit depending on genre/style... for example, if someone said they wanted to make old-school "Vancouver Sound" EBM/Industrial (ala Front Line Assembly and Skinny Puppy) you'd want a mostly-analog and digital-analog-hybrid setup with plenty of CEM analog filters (the DSI Evolver and a MoPho would be good places to start).

Still, the point is that IMO, good analog filters lend a special and unique sound that can't be replaced. However, you don't really "need" too much analog and the analog obsession is often (but not always) an exaggeration. Additionally, there are very special sound characters which only digital synths have.

That, plus honestly I prefer digital or digitally-controlled oscillators for the flexibility, staying-in-tune and no-warm-up.

So my preference is for a studio that gives analog a significant role/place, but no, you do NOT "need" analog to make good music and you don't REALLY need huge amounts of analog gear.

Get a good monosynth with a filter input and a keyboard. You can do the rest with good quality software or VAs/Digital synths.
http://www.myspace.com/studiodekadent, Cubase 4/TC Powercore X8/MOTU PCIe424 with 24io/MOTU MIDI Express 128
Top

You need at least ONE analog synth/source for that silky organic sound but that's it.
I have a very good hearing and I'm often disturbed by the "plastic" digital sounds, especially on VA synths, too many frequencies are filtered away at the DA converter no matter how good it is.
Just pick one analog synth and it'll complete your set.

When I read the opinions here I always get the feeling that people know exactly what they want a song to sound like and set to it dialing in that sound on whatever gear they currently have plugged in. I work in the opposite way, having discovered sounds morphing slowly into songs as they fit around bits I compose on piano. Analog synths are great for my approach -every time I get another one some new ideas come out of it. Now I just need to get to it with recording :/

I can only speak from limited experience on the digital vs analog... I had an Ion for a while and thought it sounded sort of plastic and somehow simple compared to the older analogs I was messing with at the time -probably a P600, Jupiter 6 and Source.
Top

who cares, you do what you want to do with whatever you want to use or have access to.
Top

Let's all log out of VSE for a week. Please...stop drooling over s**t, and press record and create something. Why is everyone compelled to get caught in this cycle of justification, and comparison?

Who's in for a new competition?
Top

Jabberwalky wrote:Let's all log out of VSE for a week. Please...stop drooling over s**t, and press record and create something. Why is everyone compelled to get caught in this cycle of justification, and comparison?

Because analog is sooo organic if you have the ears to hear it, LOL.

Thanks to Korg for saving us from the analog thirst via the inexpensive Volca line.