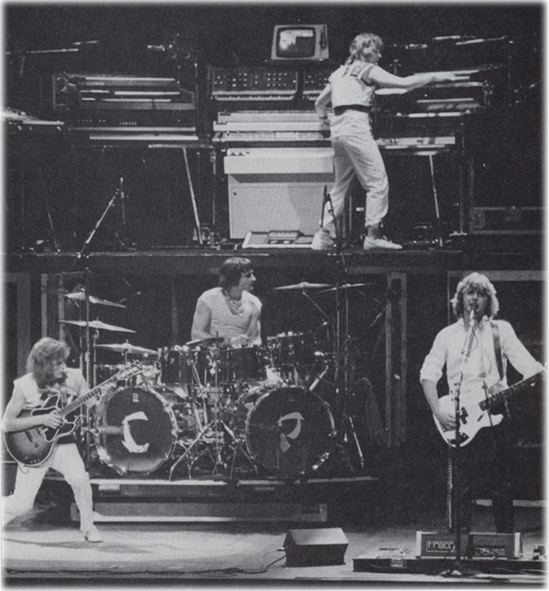 I can spot a Mellotron, a Fairlight, two Minimoogs, a Polymoog, Fender Rhodes, Yamaha CP, and thats about it.

In this video he seems to be using even more keyboards. I heard he had up to 28 at one time!

What all did Geoff use back then?

You missed Prophet 10, Solina String Ensemble, Hohner D6 clavinet. Looks like a CS80 off to the left. Tried to find a larger image online. I'm pretty sure I've got an old Keyboard magazine with a larger photo somehere.
Top

Z wrote:You missed Prophet 10, Solina String Ensemble, Hohner D6 clavinet. Looks like a CS80 off to the left. Tried to find a larger image online. I'm pretty sure I've got an old Keyboard magazine with a larger photo somehere.

I just listed what I could see, the picture isn't the best. I wish there were some pictures of his setup in the Asian in Asian concert.
Top

I believe the b&w picture above was taken during Asia's first tour back in 1982.

Geoff subsequently replaced the Polymoog with a Memorymoog and added a PPG Wave 2.2 and a SCI remote keyboard controller for the 1983 tour.
"The (Yamaha) CS-80 is a step ahead in keyboard control, and a generation behind in digital control" -- Dan Wyman, Jan 1979
Top

How could he possibly have time to PLAY on all those keyboards during a 1 hour concert? He's just part of the band, isn't he? Not the soloist?
Top

It's easier to have several keyboards set up - each with a different sound - rather than 2 or 3 keyboards and having to worry about changing patches in the middle of a song or between songs. Even in the studio, I prefer this method.

Remember, the MiniMoogs have no patch memory and one has a lead/solo sound and the other has another sound like bass or sound effect. The Solina only does strings. The D6 is just a clav. Rhodes - electric piano. CP-70 - electric grand, Mellotron has one set up tapes loaded. The only instruments he can change sounds on are the P5, P10, CMI and PolyMoog.
Top

Here's a photo of Geoff Downes posing in front of his 1983/84 keyboard rig:

Note the addition of the Memorymoog on the left (ontop of the CS-80), PPG Wave 2.2 (underneath the Fairlight keyboards), Prophet remote keyboard
and a Novatron (instead of the white 'Tron he used on the previous tour). Also, there appears to be a SCI poly-sequencer to the left of the P5. Out of
view to the left are the Hammond B-3, Moog liberation and a grand piano.

I'd hate to be stage worker for guys like Jarre, Vangelis, Downes or Eno back in the 70s and early 80s..Must be a short carreer.
Top

Ah, how that photo brings back memories! The old Keyboard magazine article and then it's subsequent re-appearance (with many other interviews) in the "Rock Keyboard" book.
There is another photo of Downes's rig in the same interview where you can see pretty much everything up on his scaffold, including a disembodied hand that seems to be poking out from behind the curtain to adjust a setting on one of the synths (Prophet 10 maybe?) while he's over at the Yamaha piano

28 keyboards seem to be a bit of an exaggeration!? I can 'only' count to 20 or 21 at the most (including the Moog taurus pedals, the Liberation
and the Prophet remote keyboard).
"The (Yamaha) CS-80 is a step ahead in keyboard control, and a generation behind in digital control" -- Dan Wyman, Jan 1979
Top

In 1982 Asia had some major concerts booked in Japan. John Wetton had left the band shortly before. Rather than cancel the lucrative shows they were able to get Carl's friend Greg to fill-in at the last minute. Geoff Downes was somehow able to ship all his keyboards to Japan, a feat that would be impossible today:

One can wonder how Jean-Michel Jarre managed to ship over a metric ton of gear to China in 1981 aswell as transpart it between several cities.

But these rock star keyboard rigs were kind of ridiculous, as if only to show off that the band made lots of money.
Specially when they usually played a few Hammond solos, and some monosynth noodling here and there. You wouldn't NEED 20 synths for that. The keyboardist was a part of the band, not the sole focus of the concert like Wakeman or Jarre.
Top Found it. It was a bit tricky to scan and I had to merge two sides of the pic as it stretched across the spine of the book (I've also marked the rogue hand on the Prophet FYI).

Ah yes, and:
http://pop-break.com/2011/09/08/intervi ... es-of-yes/
http://www.vintagerock.com/index.php?op ... s&Itemid=4
These two interviews mention his 28 keyboard setup (clearly not this one above) - apparently it was for an Asia in Japan gig.
I'd be curious to know how the double-manual instruments were counted. Given the presence of the Hammond J and B organs and the Prophet 10, it may have really only been 25 actual instruments appearing as 28 "keyboards" (either way, it's still too bloody many!