Could someone explain, using Layman's terms, the definitions/differences/similarities/whateveries of:
- Lunchbox
- Eurorack
- 500 series
- HP 14

I got a message from someone (a reaction to the DSI DSM02 product page I've made for a shop) stating that Lunchbox and Eurorack are different things, yet at the same time these terms seem to stick together (@google) like chewing gum to highschool desks..

Lunchbox usually refers specifically to the API500b PSU/Host for 500 series pro audio modules. Eurorack refers to the 3U/12v modular synth format/standard. Or to the line of Behringer audio mixers. I've been an Eurorack Modular Synth enthusiast for a couple of years and have never heard the term "lunchbox" applied to the cases/enclosures or any other part of Eurorack stuff. HP (horizontal pitch) is the measurement of faceplate width in Eurorack Modular. Cases/enclosure usually specify total HP, maximum depth and total milliamp availability on the 12v/-12v and 5v power rails. A typical case has 104hp per 3U row. So the DSI would take up 14hp of that.

Check out http://www.modulargrid.net/ for a visual explanation of eurorack cases etc.
Top

Right. Lunchbox = 500 series. Eurorack = 3U modular started by Doepfer in the 90ies. The DSI module is the latter.
Soundcloud
Twitter
Top

I'm pretty sure theres a compact, smaller than 84hp, eurorack case that is also referred to as a lunch box.
We'll always be remembered, we'll always be dismembered.
Top 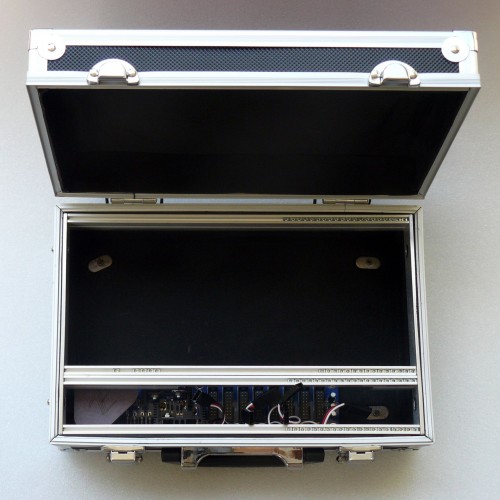 The modules in both systems (500-series and Euro) being 3U high is the only thing they have in common, as far as I know. Here's more Euro dimensional specs than anyone would care to shake a stick at: http://www.doepfer.de/a100_man/a100m_e.htm
Arturia MiniBrute -- bits o' Euro -- Sammich SID -- E-mu MP-7 -- Korg ER-1 -- Thingamagoop
Top

API 500 series format is also a lot pricier.
As expensive as Eurorack may seem, there are unpopulated 500 series racks that cost over $500 for one row. The Radial Workhorse with the built in mixer is $1500

!
(though admittedly I may end up going that route just for its convenient connectivity)
Also you wont find many 500 series modules for less than $500 much less the $100-200 range that a lot of Eurorack falls into.
I actually was in a quandry about whether to delve into Eurorack or a 500 series rack about this time last year. Then I realized I can buy useful DIY kits for less than $200 (or even less than $100) from Synthrotek, 4ms and Erica Synths. And a Tiptop happy ending for $150.
There are some 500 series DIY that are close to that cheap, but not quite. And the rack alone is just a wallet full of cash for something that doesn't pass audio until you buy more things!
It still puzzles me that Moog released two 500 series modules before they ever went into modular again.
Though allegedly they are coming to Euro?
Whatsoever thy hand findeth to do, do it with all thy might; for there is no work, nor device, nor knowledge, nor wisdom, in the grave
Top

Ahhh, I forgot about the Erthenvar with the 1u tiles, I stand corrected.
Top

500 series is not really a synth format, it's for building up custom channel strips for tracking/mixing in the studio although that's not all you can do with it. So you'll find mostly mic pres, EQ, compressors, etc. Moog does make a 500 series filter, that's about it.
I listened to Hatfield and the North at Rainbow. They were very wonderful and they made my heart a prisoner.
Top

they should have at least implemented Midi, as on their 500 series delay.
Whatsoever thy hand findeth to do, do it with all thy might; for there is no work, nor device, nor knowledge, nor wisdom, in the grave
Top

Would recording engineer types be any more likely to use MIDI than they would CV, though?
Arturia MiniBrute -- bits o' Euro -- Sammich SID -- E-mu MP-7 -- Korg ER-1 -- Thingamagoop
Top

pricklyrobot wrote:Would recording engineer types be any more likely to use MIDI than they would CV, though?

yes, midi is pretty ubiquitous. Most audio interfaces have at least one midi port. And many control surfaces until recently were midi. It's also about who the target market is for these things. Though to be honest I'm not sure who that even is. Collectors?
Whatsoever thy hand findeth to do, do it with all thy might; for there is no work, nor device, nor knowledge, nor wisdom, in the grave
Top

Guess maybe it's so you can offer a band that you're recording the "magic Moog pixie dust" that they may have heard about, without having to plunk down for a Voyager or whatever?
Still gotta be a pretty small demographic though.
Arturia MiniBrute -- bits o' Euro -- Sammich SID -- E-mu MP-7 -- Korg ER-1 -- Thingamagoop
Top
Post Reply
21 posts