Synthex Madness. Mario Maggi has apparently had this in the works. 61 key keyboard and desktop module. 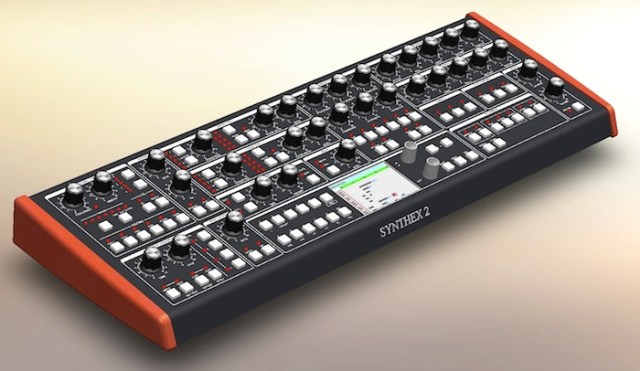 Well this is what i would call "good timing"

A digital VA synth vs a recreation of the original with original parts. Depends on the price difference I suppose.

I doubt the finnish guys will reach that indiegogo goal, but I think Indiegogo lets you keep the money even if the goal isn't reached, unlike kickstarter? And Maggi has the name attached to his version so that should help the publicity quite a bit.

It sure looks pretty, even if that is a photoshop. Dangit, we haven't had a new synthex since 1984, and now we get two at once

They were talking about this on Sonictalk last week.. Seems like something will be going down with this in the courts soon. lol.
MIDIVERSE-TV : Tutorials and Review Videos featuring Synthesizers, Drum Machines, and other musical instruments/related technologies.
Top

I wouldn't be surprised. Some finnish dudes buy a large warehouse, finds lots of Synthex parts and boards and decides to do a remake and make billions of dollars.

Many would probably rather see an analog updated Synthex 2 version a la the Prophet 6.
But lets see how it turns out..
Top

MIDIVERSE TV wrote:They were talking about this on Sonictalk last week.. Seems like something will be going down with this in the courts soon. lol.

Yes, it will be interesting to see how this turns out.

This is from someone who claims to be close to Maggi, via MatrixSynth:

my name is Enrico Cosimi, I'm the author of the text on ACM concerning the Synthex 2. I have been in touch, here in Rome/Italy, with Mario from the late Eigthies and, from the mid Nineties, I'm working with Mario on his "version two"; as you can imagine, Mario is a very very very busy kind of genius, who conceived and realized a lot of third party non-musical items (especially for telecommunications and health). I am not allowed to reveal all the data concerning the new Synthex 2 (b.t.w., it will be a digital equipment: would you dare to conceive an analog instrument with 128 LFOs and 64 EGs in the same box?), but - trust me - when it will be done, it will be a GREAT machine.

Here, I have read some incorrect statements, so, I'll try to ad my 2 cents:

a) the original ELKA brand has NEVER acquired rights over the Synthex name; they built under license from Mario Maggi;
b) i was pretty curious (and still) about the new finnish company; I think they would have believed that Generalmusic acquired Elka and Elka acquired Synthex. That's incorrect (see above, point A);
c) when I talked with them, at the Mövenpick meeting in Frankfurt, they had not jet contacted Mario (who is known for not being very fast in email answering);
d) Mario Maggi knew from music press about the "finnish Synthex", he doesn't know nothing about the idea of resurrecting the old analog CEM/based machine;
e) the finnish doesn't know anything about the Mario's Synthex 2 effort
f) Mario Maggi is the legal owner of the 'Synthex' name
g) Mario Maggi is the legal owner of the original source code for the vintage machine, and for all the boards inside

frankly, I don't know how this thing will end up.

Last week, I heard, at Mario's lab in Rome, the new HIDEA oscillators and filters and, IMHO, they sounds absolutely great, with a lot of features (now) common and until now, very uncommon, with - at least - three or four new behavior on filter and waveform treatments that are IMHO worthy of patent by Mario.

Maybe, in the next week, Mario Maggi himself will decide to show us more details and terms and schedules and everything on the Synthex 2; for now, I can simply state that when it will be ready, it will be a real blast.

The other Synthex' kickstarter (the finnish guys who bought the Elka warehouse) failed miserably, and they stated that all backers would get full refunds and that no synths were going to be made.
Top
Post Reply
9 posts • Page 1 of 1