I wonder what the sales of the System 500 was like, that thing sounds immense but hasn't been a lot of buzz about it?

The whole "Boutique" thing is very love it or hate it. I can see the point of going in that direction for Roland but as a professional studio tool they're a bit of a joke really.

Also would be nice to see something a bit different from them, the JD-XA sounded awesome but had a bloody terrible interface. It seems Roland only allows itself one big "risky" product every 5yrs and unfortunately they almost always find a way to f^&k it up. Everything else is 909, 808, Jupiter 8, Juno blah blah... rehashing the same stuff they've had for decades, just changing the form factor to keep it looking current, but hey if it works why change. Seems like since they've grown into such a big company, anything that involves being adventurous, taking risks and experimenting is not fostered anymore. Well that's commercialism for you.

Not to be negative but I'm not expecting anything groundbreaking from this release.
Top 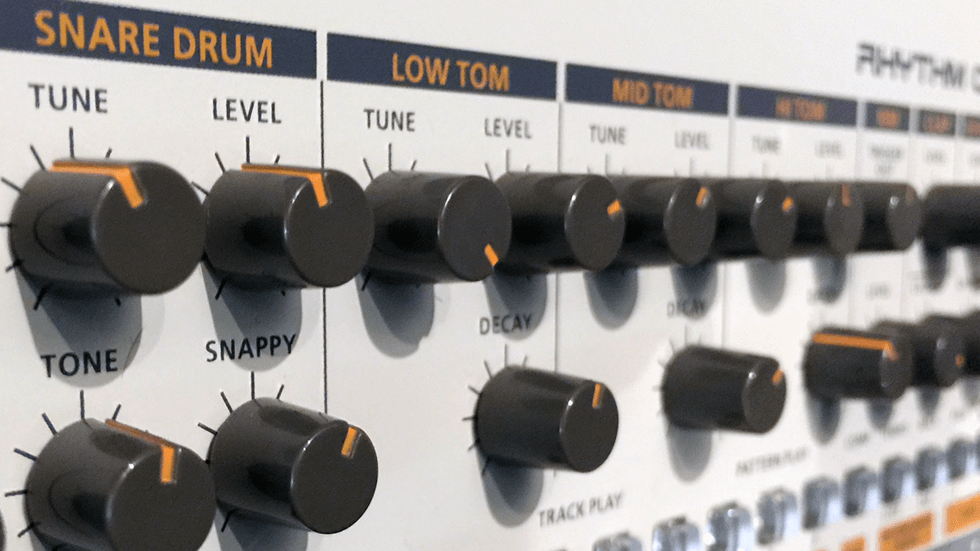 No, the knobs and labelling ("Mode") are different on the 303 and the tom decay knobs are at a different location on the 909 (track play / pattern play buttons are also closer together than on the original).
Soundcloud
Twitter
Top

It also looks like the tiny boutique buttons on the 909.

Where's the MC-303 20th anniversary reissue?
I listened to Hatfield and the North at Rainbow. They were very wonderful and they made my heart a prisoner.
Top

salwa wrote:Aren't that just photos of the originals?

the knobs on the 303 are totally different - the originals look a lot nicer, and are set into the device. What's the source on these pics? The website is unchanged, at least from the original link.

I hope they do it better than the TR-8 this time. Honestly, when I got my real TR-606 and TR-808 and compared them to the TR-8, the difference was huge. The TR-8 sounds really thin and lame compared to the real things. You can't really tell this if you don't compare them IRL. And all this c**p about "there's more difference between 2 808s than an 808 and a TR-8" is just bullshit.
Top

I just know that it's going to have two outputs at most...if they can improve on that it could be a hit.
I also felt that the TR8 was lacking and wasn't as intuitive as I was hoping.
Top

I totally agree with they output issue. I looked at the Tr-8 for my 909 fix. Before really getting into the sound, the lack of individual outputs had me pass.
Top

I guess they figure now that daws are so popular, recording techniques no longer rely heavily on the individual outs? Or they're just trying to cut whatever they can cut to get it to fit a certian price range...
This looks like a psychotropic reaction. No wonder it's so popular...
Top

I still want to know where those pictures came from, and if they are in fact legit
This looks like a psychotropic reaction. No wonder it's so popular...
Top

Apparently, the pics were leaked on the Roland page. I found it on several German music "news" type websites as well as the popular German synth forum...