I am looking into analog drum machines and it's giving me a lot of trouble finding one that seems to fit all my needs/wants. I can't afford the Elektron or Tempest and would like to find something $800 or less.

So I'd like to find something that has the following:
1-be able to save patterns you can assemble into songs.
2-have sound sculpting abilities and maybe overall filter.
3-be able to record parameter changes.
4-be stand alone, even while being able to be to hook it up to your PC via MIDI or USB.
5-be able to save kits.
6-I have no need of sampling.

I know that's a lot of features but having a frustrating time finding one that has all. For example, the Roland TR-8 looks great, but it has only 16 pattern memories I think, plus no song assembling- seems like a major thing to leave out.

Novation's Circuit looks really interesting, but the synths are not needed, but guess I could use them for drum sounds too.

Arturia's Drum Brute looks interesting but it doesn't seem to be able to save kits and no recording of drum control of sounds.

Akai's stuff seems to need to be computer connected to do anything.

Anyway, if you guys have suggestions, it would be appreciated- my head is swimming right now due to overload of information.

by ninja6485
I'd try out the drum brute if I were you. As far as analog drum machines go, that's probably the best bang for your buck.

As for saving kits, analog drum machines really only have one kit. The kit is those sounds made by the circuits you bought. As far as saving the knob positions goes (patch memory on a drum machine?), I really don't know of any analog drum machines with patch memory, but maybe the electrons have some form of this? Usually the programable parameters of analog drum machines are so simple, you really don't need patch memory, but I can see why you might want it for a livery set or something. This also presents problems for recording knob positions. Again, that's more of a digital feature. With analog instruments in general, people usually value having the knobs directly controlling the circuitry without having the additional layers of digital technology on between: a sort of purity value. I guess it's like having a sportscar with no power steering or traction control, etc.

by Z
Other than the Arturia DrumBrute, the "alternatives" you listed are all digital. In that case, check out used Elektron MachineDrum or Even the Sonic Potions LXR.

by rockmachine
Yes Z, should have added analog modelling to the subject, which I have no problem with as I'm not one of those purists about that issue. One that caught my attention, but is rarely mentioned by any "Best of " lists is Beatkangz Beat Thang . Little more expensive, but seems loaded with features.

The Elektron MachineDrum is one of the best drum machines ever made. It's the one that started the "parameter lock" feature on drum machines. It has several different "machines" or "synth engines" that can be selected to create drum sounds.

Elektron recently discontinued the MachineDrum and MonoMachine, but both are still available new from some retailers. On the used market, the MachineDrum is well within budget even the SPS-1mk2UW which also has the ability to import samples over MIDI.

You might even consider the new Korg Electribe Music Production Station. It's basically an updated version of the Korg Electribe EX EMX-1. I've never used either, but the EMX-1 has been around quite some time and has been praised my many. I hear the new version lacks some of the features from the original, but adds many new features.

BTW: The Beat Thang is a piece of c**p. One paper, it looks like an awesome machine, but it's plagued with stability issues. I hear they crash all the time.

by Zamise
I have to agree with Z on the Beat thang, it is a phrase sampler more than anything else which goes heavily against your 6th criteria, anyway, not sure if this will meet all your critera but how about an Akai Rhythm Wolf?

by ninja6485
If you're ok with a beat thing, why not just spring for an Akai MPC? You can do everything you want to do with it, and load any sound you want, including drum sounds you make in software instruments, as well as drum sounds you could make with an affordable analog synthesizer like the microbrute, or an accompanying volca beats. You might be able to get all 3 for your budget, and have supra beat thing capabilities!

by griffin avid
Or simply understand that you will be buying more than one piece of gear in your quest for "Ultimate thing that I program/create my drums on/with." All in one? Not going to happen and even something that gets the job done today will be unable to do so in the future because the job will change.

As a guy who doesn't seem to have a lot of experience with drum machines--
I say that because your options are all over the place. And you, in some cases, are fine with either side of the fence.

You need something simple and immediate and your as you needs grow, so will what you chase after.
Get something very strong in a narrow lane.
Something great that uses samples (not CAN use samples, but it's great with samples)
Something that generates new tones and sculpts them (an easily accessible editing interface)
Withing the above choices - -Something to sequence/generate/manipulate drum patterns (so that you can work different ways over time)

The reason I say this is- your end results can arrive multiple ways.
For example:
You may desire to have drums that are just DIFFERENT than everything else and everyone else.
You can load some wacky samples into your sampler.....
You can edit some 'normal' drums into something rare....
You can create from scratch a different sound or direction...

Unless you narrow in on a sound and system (which I doubt you will early on)- you'll always be circling around these ideas.

by rockmachine
I am pretty sure all could have been accomplished with the Elektron or Dave Smith's machine, but it's more than I want to spend. Just got the King Korg and am going to pair that with the Roland AIRA Sytstem 1-M module. I do like the look of Novation's Circuit and it does seem to offer most things I am looking for-too bad it's got synths instead of more drum pads, but you could always program the synths to be drum sounds too. And agreed, maybe looking at the MPC used crowd couls be a good idea.

rockmachine wrote:I am pretty sure all could have been accomplished with the Elektron or Dave Smith's machine, but it's more than I want to spend. Just got the King Korg and am going to pair that with the Roland AIRA Sytstem 1-M module. I do like the look of Novation's Circuit and it does seem to offer most things I am looking for-too bad it's got synths instead of more drum pads, but you could always program the synths to be drum sounds too. And agreed, maybe looking at the MPC used crowd couls be a good idea.

The Circuit is a very capable drum machine with its new software update. It's really quite good for the price. If budget is an issue, I'd recommend the Akai Tomcat as a low-cost alternative. (FYI, I own both of these machines.)

by rockmachine
After a lot more research guys, I am leaning more and more towards the yet unreleased Arturia DrumBrute. Also getting tempted by the Arturia Beatstep Pro to bring everything together. The revisions of it have added a lot of great features too. I'll keep you updated as things progress and thanks for everyone's input. 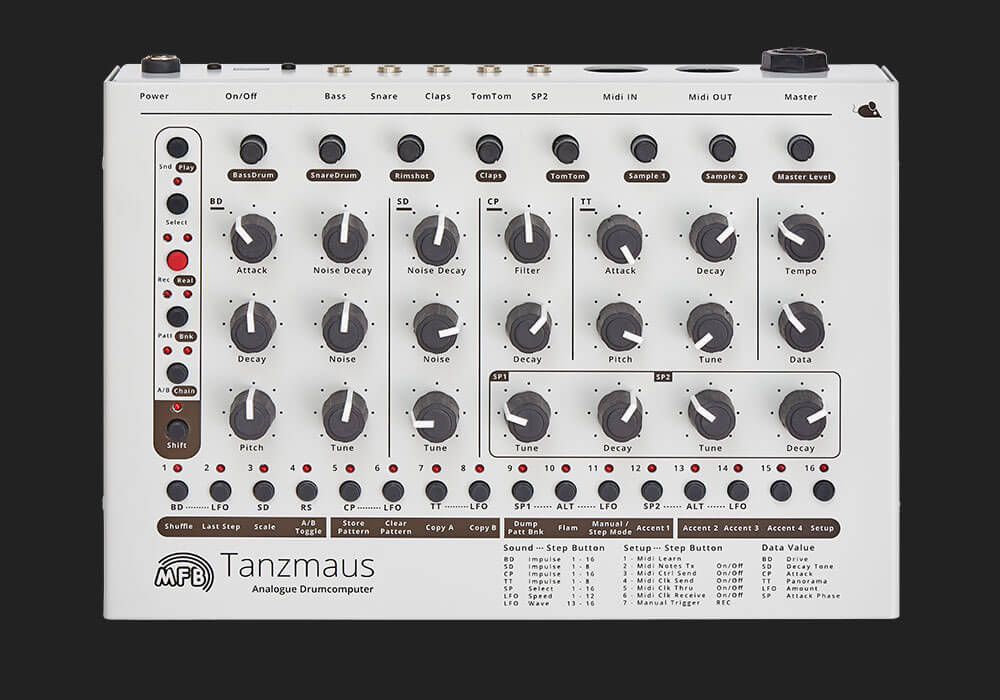