by Zamise
So far my only choices seem:

Phillip Rees C16 (Out of production, rare, none on the bay) 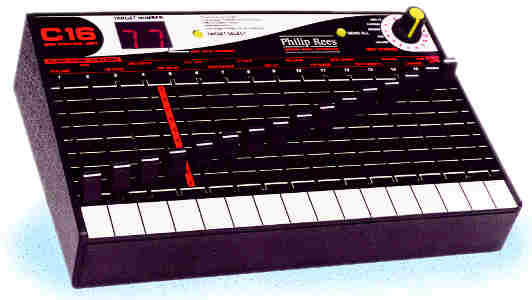 That Behringer BCR2000 looks kind of neat in an earlier thread, but its all knobs, I'd prefer something with 16 sliders and small like the ones I've shown here.

Zam
by daddio
Don't forget the Doepfer Regelwerk.
by Zamise
Ah yeah that looks like a really cool and impressive slider box, first 16 for me would be for velocity on those channels, then 8 extra for Res & Cut etc would be nice. If I can get a used one maybe, looks pretty expensive otherwise, so I'll still keep an eye out for one. Thanks! Zam
by hageir
^^
all those you mentioned

plus (only 8 faders, though they can be linked together..)
Behringer BCF2000

maybe you can find a MIDI mixer controller with 16 faders?
that's a little ridiculous though

by tom Cadillac
I,v just bought (yet to arrive) a roland ef303. One of the reasons i got it was coz I hope to use the 16 sliders for midi control of locked up old digital synths. Mine was cheap, plus you get a whole lot more stuff with one of these. It might come soon and if it does I'll try and remember to let you know.
by Altitude
I would hold out for a PC1600 if your looking to go beyond the basis CC type stuff, for SYSEX it's about as good as it gets
by hageir
this one!! http://www.doepfer.de/pf.htm
by Twiddler
Lemur, of course. You know you want it!! 8)
by Twiddler
Pocket Fader looks wonderful, I never saw it as I've seen it today before.

CME Bitstream 3X has caught my eye since I read a great review in SOS a few months ago. I was thinking of getting the novation keyboardless one, but the bitstream seems nicer, more programmable and flexible. I've never had a knobby midibox before so I have no idea what I am talking about though.

I have one of these.
by Zamise
Pocket fader looks like page says sold out, does look neat, I'll have to keep eye out for one of those.

The others look neat too, but I would like at least 16, not 8, sliders. I may have to consder one of those though.

Thanks for listing more alternatives for me to look at guys. A Lemur, oh yeah in my dreams I do have one

Zam
by crystalmsc
The PC1600x is nice, specially since it got a lot of presets for some popular synths. But it has no free editor. On the other hand, the Kentron Kontrol Freak got a free editor and also a lot of supported gears. Also seems like, it was built as a successor of the older 1600 line when it was released.
by Zamise
Finally, I just won a Peavey PC-1600, hope it'll do the tricks I want it for...
by aeon
The first time you remotely edit something via sysex and make that device sing, you'll know you made the right choice.

I put off getting it for years, but when I got my PC1600x, I realized so fast I should have done it years before! And it is built like a brick.