A forum for discussing the pros & cons of buying a particular synth and for advice on buying synthesizers.
Forum rules
READ: VSE Board-Wide Rules and Guidelines
Post Reply
12 posts • Page 1 of 1

Alright, I know this blasphemous to some people, but I'm planning on picking up a cheap mixer to feed directly into my little zoom mrs4 digital four track. I have no intentions of creating anything near professional quality. I'm essentially just recording my little evening solo jams. I'd like to go ahead and ask if behringer mixers are really that bad? I've read numerous threads here that seem to go back and forth, but taking into account what I personally want to do, are they really that bad of a choice? I've owned a behringer k450fx keyboard amp for three years now and honestly I'm not the least bit disappointed by it considering how much I paid for it. Despite this I'm leaning heavily towards the Peavey.

These are the three models I've considered, starting with the cheapest which is obviously the behringer

Peavey PV6 (less inputs, but seems to have received the best reviews, also made of metal)

Of those, I'd go with the Yamaha. Though I've not had a Xenyx, I have had two Behronger mixers. First was ~10 years ago, liked the mixer - despite the noisy signal, it was nicely built- liked it well enough that I sold it and bought a second, newer model. Which fell apart and was noisy. Cheap faders. That said, I'm sure the behringer would get it done. Especially if you're just using it at home. Also in that price range are the small Mackie VLZ3's - I have an 802-VLZ3 that I love (2-bus w/ aux sends and inserts, and it's small!) Could also pick up something gently used.

These days the only Behringer I have is a BCR-2000, which despite being a bit odd in design and implementation, works very well.
Top

Dont touch the xenyx!! Please save yourself likely hassles..

The yamahas.. I'm looking at getting a 142C. Everyone i've heard from that has used them has nothing but praise..
The price is amazing on these too... half the cost of a mackie vlz3, and honestly I've heard better things about yamaha quality than mackie.

I dont know where you're from, but here in Australia yamaha offers a 5 year warranty on them.. Which gives me alot of confidence.
Top

I use a Yamaha MG124C as a submixer.. it works ok.. can't really complain - the built in compressors don't do much for me though (prefer to use outboard for guitars/vox still) on the way in mild comp
Top 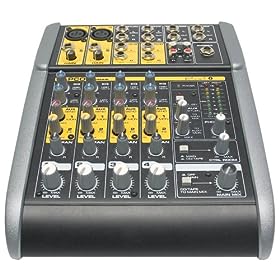 I will be mainly working with line level stuff. I'm really leaning towards the yamaha now rather than the peavey. The yamaha seems to have gotten good reviews also. I figure its worth ten dollars more for the extra channels and on board compression, despite the slightly inferior build quality.

*edit
Sadly the tapco blend 6 has been discontinued. I want to actually get something new this time around, rather than used.
We'll always be remembered, we'll always be dismembered.
Top

The Behringers sound fine for f**k about, unless you are using the EQ or preamp gain. h**l, I have a 4ch over here you can have if you want to drop by one night. That said, the Yammy would be a better choice, though Alesis makes some useful mixers too.

Just so you know, the Music Center in Hickory and Gastonia still carry that Tapco stuff (at least as of a month ago).
Brains can be used like a "stress ball," but only once.
Top

yeah the sound is fine on the behringers, its just the build quality that keeps me away
Top

tallowwaters wrote:The Behringers sound fine for f**k about, unless you are using the EQ or preamp gain. h**l, I have a 4ch over here you can have if you want to drop by one night. That said, the Yammy would be a better choice, though Alesis makes some useful mixers too.

Just so you know, the Music Center in Hickory and Gastonia still carry that Tapco stuff (at least as of a month ago).

Are you talking about one of those little mx400 micromixers? Anyway I need the ability to pan at least two of the channels and I need at least one stereo input. Thanks anyway though, I should have mentioned this in my initial post. I'm also living in Cabarrus county now (east of Charlotte), so Hickory and Gastonia aren't exactly close, thanks for the heads up though.