I'm doing a deep dive on something, and (while I'm Googling around in the meantime) I wondered if anyone knew of any resources that have catalogued or sampled the various replacement drums chips for the LinnDrum (LM2)?

I will trawl through my own archives (and sample libraries) for various companies offering Linn-compatible chips, but just wondered if some Linn fans had already done this work?

I don't know offhand yet whether Linn made alternative sound chips available, but certainly third-party companies did, and it was of course possible to make your own with the right gear - but I imagine most Linn users just bought a range of available chips with alternative sounds until the Linn's became unused relics.

Linn itself had a decently large replacement soundchip library for the Linndrum that you could buy sounds from.

SYCO in London also had a sound chip collection - I'm not sure yet whether they were offering the factory Linn sounds, and/or whether they were also making their own custom sounds (which wouldn't surprise me, given the gear they had access too - they were basically the premier UK dealer for all the high-end stuff - Fairlights, Kurzweil K250, DX1's, Emulator IIs, Linn 9000s etc).


Alternative percussion sounds are now available for the LinnDrum from Syco Systems, who've set up a special demonstration computer program to play any of the 100 available sounds on demand. Prices range from a single chip at £35.00, two at £45.00 and four at £65.00 (all prices plus VAT).

Then there was Digidrums, which became Digidesign who started by creating and selling soundchips for the Drumulator et al:-


Labelled from N101 to N108, these are Electronic kits 1 and 2, Latin and African percussion, Rock drums, Analogue drums, Jazz drums and sound effects.

While the chips weren't identical, they were similar enough that, eg, the Oberheim Prommer could burn chips that would work in Linn, Oberheim and Sequential drum machines. I have *some* binaries that I downloaded from http://www.electrongate.com/dmxfiles/dr ... index.html IIRC he got a cease and desist years ago from Forat about all the other bins he had up there. I will check my archives!
Bandcamp
Facebook
Soundcloud
Soundware Shop
Top

Thanks - while searching around I did come across references to that Electrongate site and while I hadn't been to that particular page (I'll check those out - thanks!), there's a similar one for the DMX I think (http://www.electrongate.com/dmxfiles/eproms.html) which I did listen to, but that's cool as I'd like to check out as many eproms as I can while trying to find the sources of some sounds.

Given that Forat presumably still has this library, you'd think they'd do a better job of documenting what they have available, but their site is like a relic from 1996 unfortunately, with very little actually hard info...

Edit: Ooh nice - the LinnDrum page from Electrongate (which was taken down by request of Forat) is still available via the Wayback Machine, including the sample downloads - so I'll have a look through those too.

I just realised I should really have put this thread in "Samplers" - I've asked for it to be moved there.

I've been chatting with Paolo@Synthmania who's been super-nice and helpful.

He posted here a scan of the alternative chips from Linn:
https://www.gearslutz.com/board/electro ... -stab.html 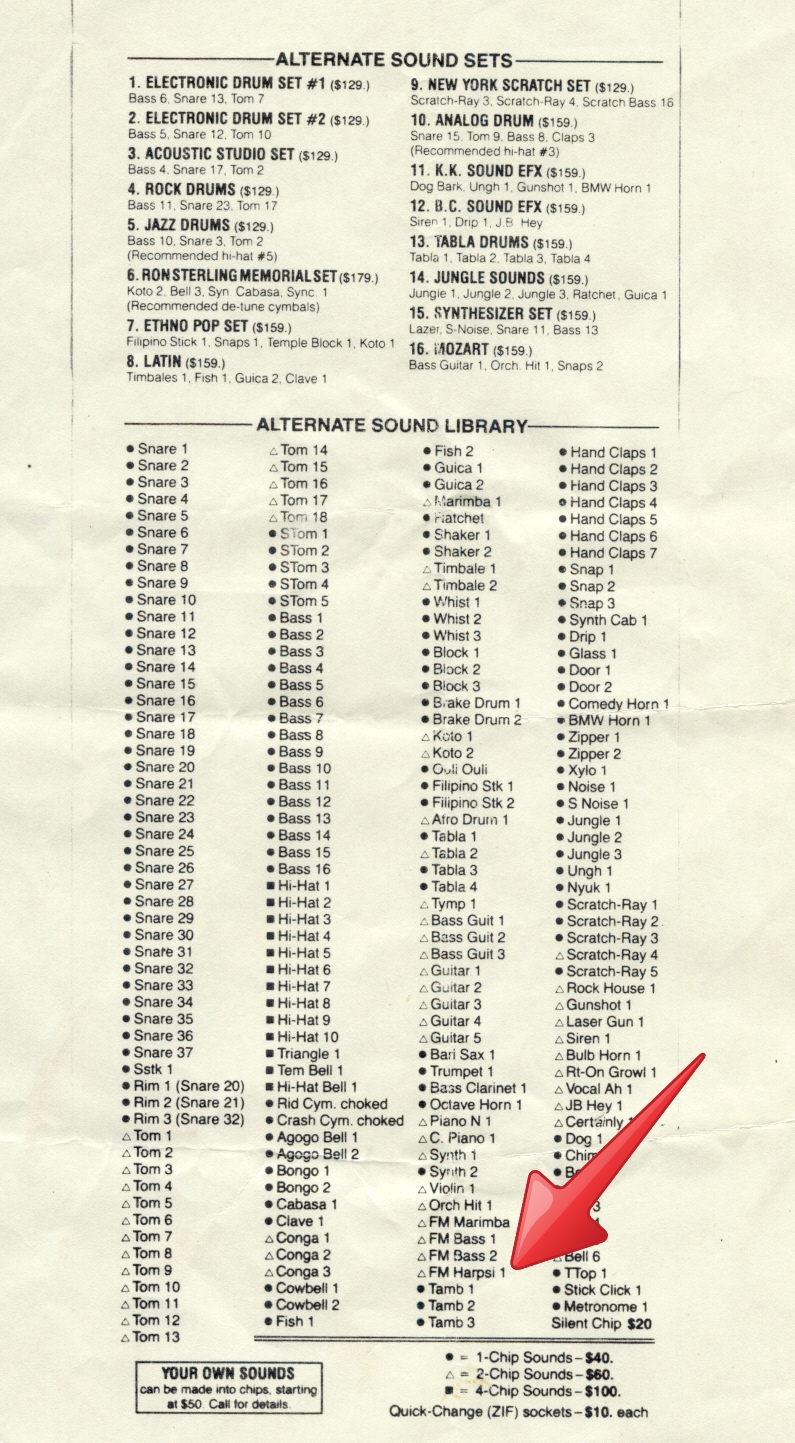 Anyway, Paolo's been super helpful to help me rule out whether this was a factory sound or not.


"I had a complete set of my own drum sounds put on to Linn chips for me by Roger Linn prior to the recording of our first album. I went into Air studios for a day with our producer, Vic Coppersmith, recorded each of my drums individually and had those sounds encoded on to the chips. The recording process is very straightforward except that because the chip won't accept any ambience on the recorded sound you have to gate it very heavily. As the maximum sample time is something like one second, then obviously that's not enough to be able to do cymbals or anything else with a long decay. I did Octobans – which I don't think anyone has ever done on Linn – and then I did all the toms, bass drum, snare and cross-stick (which again I don't think has been done). Then I also did a complete set of backwards toms – I think I'm the only person in the world with those. So then I was in the position where I could set up a complete pattern using backward toms on the Linn. There's no limit to the different sounds you can make up the chips for, and then you just open up the machine and slot them in and use them as you wish."

How come most records done with the Linn have a decent sounding snare?

I'm not saying this is what they did in my case, but it's interesting he talks like this was common practice.
mu:zines | music magazine archive
difficultAudio | RetroSound MK100 for Kontakt
Top

A bunch of stuff in here:
https://drive.google.com/drive/folders/ ... sp=sharing

desmond wrote: ↑
Thu Nov 19, 2020 2:32 pm
Edit: Ooh nice - the LinnDrum page from Electrongate (which was taken down by request of Forat) is still available via the Wayback Machine, including the sample downloads - so I'll have a look through those too.

Ooh, please add those to the above folder

Thanks - I'll take a trawl though those as I root though my various sample libraries...

Samples and patches were really expensive back in the 80s, especially when sold as chips, cards or cartridges rather than tapes or floppies.
I listened to Hatfield and the North at Rainbow. They were very wonderful and they made my heart a prisoner.
Top

memory chips of any kind were not cheap in the 80s.
Top

I love the "Silent Chip" for $20. Is that for programming rests??

Yes, that made me chuckle too.

(Or, "Boss, what should we do with all these broken sound chips..?")
mu:zines | music magazine archive
difficultAudio | RetroSound MK100 for Kontakt
Top

desmond wrote: ↑
Wed Nov 18, 2020 11:28 pm
SYCO in London also had a sound chip collection - I'm not sure yet whether they were offering the factory Linn sounds, and/or whether they were also making their own custom sounds

So, chatting with Kendall Wrightson (who worked at SYCO) confirms that they weren't making any custom chips back in the day - they were selling the official Linn replacement sounds, and also the Digidrums sounds for the Drumulator, which were apparently very popular, particularly the well-known "Rock Drums" set.

This is helpful as it's one less potential source of commercial sounds, but it's looking more like the thing I'm looking for might be a custom chip, meaning the source might not be able to be uncovered.

I've even been through the various big sampler libraries in case it might have come from another source like the Fairlight, or other drum machines, without success so far.

I'll have one more trawl through the Linn library and my other various sources, and if I can't find a match, I'll probably have to be happy to leave the source undiscovered...
mu:zines | music magazine archive
difficultAudio | RetroSound MK100 for Kontakt
Top
Post Reply
14 posts • Page 1 of 1