Faulty Roland TR 606 - could use some advice

Topic Icon to let others know your topic has been solved.
Post Reply
3 posts • Page 1 of 1

Faulty Roland TR 606 - could use some advice

Hi there... I'm new so please forgive me for diving right in with my plight... but I thought here could be a good place to start...

Right well, as the title suggests I've got a duff Roland TR 606... now I bought it sold as seen 'not working' - no power they said and had suffered a battery leak..., bought from a Japanese bloke here in the UK, well I thought lets give it a shot, a friend of mine back in the day bought a 303 & a 606 from a second hand shop with the same battery-leak problem, cleaned the connectors and they both worked for him but not for me sadly.

The device had suffered an historic battery leak which had not been remedied for some time, the battery cover & part of the case were discoloured and so after some internal inspection the battery contacts were slightly oxidized and corroded slightly so I cleaned all that up as you would ( I'm not that tech-savvy but hold my own so to speak... luck and hope mostly ) - the board seemed fine on a cursory inspection, I cleaned all I could and inserted some batteries and she powered up.

OK well the machine seems slightly stalled shall we say... I can press the run button and the run/battery light turns on and the first step light turns on but not much else... the output on the headphones is just a distant and ever running cymbal sound, I have managed to turn on some other step led lights but it's inoperative for the most part.

I have removed the buttons for cleaning and one tact-switch came apart, but I understand these can be replaced fairly easily...

Any how on further inspection of the boards I think I've found the effect of that battery leak, just on the other side of that battery compartment is the main CPU ( I think ) and two other IC-chips and both those IC's have oxidized pins so does part of the CPU pins... I have made a video of this to show you, see the link below.

I fancy this is the problem, have a gander at the video... you'll see the 'furry-feet' pins... If any one of you could advise me further, perhaps a good clean ? perhaps a new CPU I don't know... either way I'm open to suggestions, thanks very much, wish me luck.

Re: Faulty Roland TR 606 - could use some advice

"I recently had trouble with my 606, for anyone with a 606 stuck playing on the first note in the pattern, replace your RAM chips! Only about $15."

That was a quote from a reddit post from a chap who's got the exact same problem as me, the device looks like it's just trying to play the first note in a pattern and that's it...

well those D444C chips ( 2 x ram chips ) on my board are the ones I have with the worst corrosion... so I'm going to attempt to clean that all up best as I can then I'll go from there, perhaps I could replace those cmos-ram memory chips and it'll splutter into life, here's hoping.
Top

Re: Faulty Roland TR 606 - could use some advice

I'm having the 606 repaired by a professional so hopefully he'll do it justice... 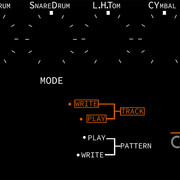 Not sure if this will devalue it greatly... might leave it as is... but I thought I'd share the image I made.
Top
Post Reply
3 posts • Page 1 of 1