Hi, first post. I have an OBXa I got when I was a kid - so you know I'm old! A short while ago I decided to get it out of mothballs and restore it. That may be a subject of another few (or many!) posts so I'll try to keep it brief here with one issue I'd like to address.

Back in the early 1980s I had the JL Cooper midi retrofit installed. I'd like to de-install it if possible - so I have the option of using the synth with or without. I remember the tech that did the job handed me one or a few rom or eprom chips he pulled from the synth – I assume it (or they) was/were replaced by a modified rom(s) or eprom(s) from JL Cooper. Whatever he gave me is gone! We had a house fire a few years back and our contents got put into a dumpster while I was on the road with a band.

From what I've gathered, I need to get original eproms burned, so I found images from this site. The readme included with those images say they are ICs 102, 103 and 104. On my OBXa, chip 102 does not exist! It's filled in holes on the circuit board. Same deal with U109 – a ram chip. It's on the board diagram but is just filled-in holes on my synth. I guess I have a different rev board? This might be a clue: the service manual diagram for the upper control board is dated 5-4-81 and has "1634C" in the lower right corner. My OB's board has "1504G" on it. It is a 120 program model though.

Of course I tried contacting JL Cooper to see if they had any docs that might help. I don't have his personal email but I tried through the company and got no response.

As you can see from the picture, from the look of the sticker U103 appears to be original. U104 is an eprom, and there is also an eprom on the JL Cooper board. But what happened to U102??

I appreciate any assistance in getting my OB back to its original state - thanks! 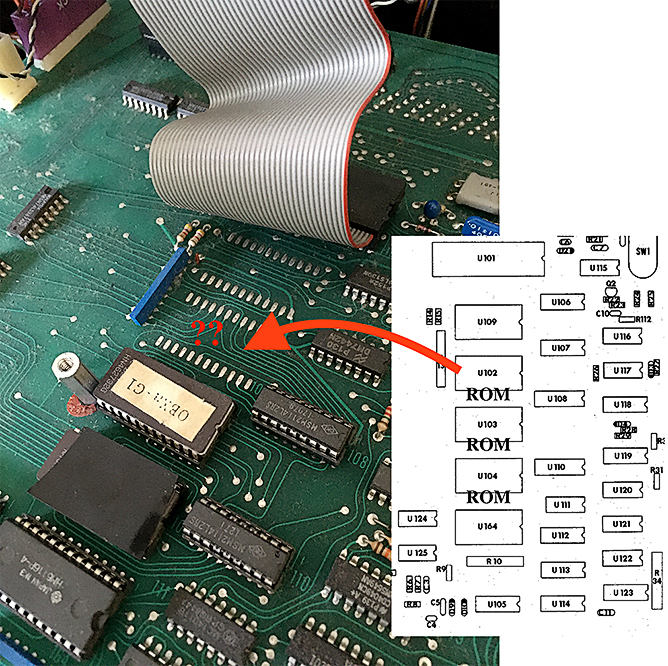 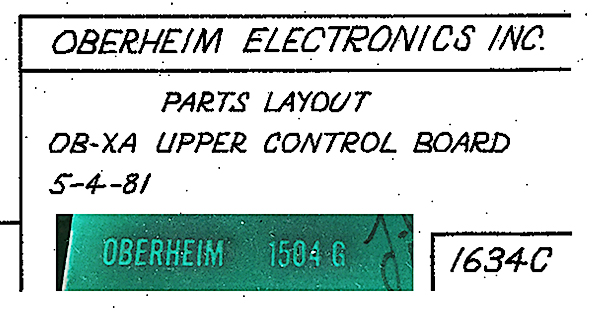 There are a bunch of chips (the ones you listed included) that were on earlier revisions of the main board, but were removed by your revision.
Top

It's been a while since I worked on one with JL Cooper MIDI, but to revert to stock most likely all you need to do is:

1. Unplug the daughterboard from the main board (I think 2 ribbon cables? 1 into processor socket as pictured and probably another into a DIP-14 socket which was for a CD4011)
2. Transplant the Z80 from the daughterboard to the processor board
3. Install a 4011 on the processor board in the now open DIP-14 socket
4. I see you have your 6116 RAM chip there which is good. (If your battery is dead and you don't want to solder a new one, check out my Battery Eliminator)
5. I see you have ROM G1 there which is good.
6. The ROM with the tape on it MAY be ROM GA0, you can compare to the ROM files you referenced or just erase and burn with the known GA0.
Top

Hi synthchaser and nice to see you here - you participated in a thread I started on the musicplayer.com keyboard forum three years ago when I started working on my OBXa. Obviously I took a somewhat long pause from my rehab project! This past March I bought your voice card rebuild kit and that's next on my list after I figure this JL Cooper deal out. We actually had a little back & forth on the subject of the Cooper board three years ago in that old thread. I hope to have the synth repaired before the next decade comes around.

1. Unplug the daughterboard from the main board (I think 2 ribbon cables? 1 into processor socket as pictured and probably another into a DIP-14 socket which was for a CD4011)

There is only one ribbon cable from the JL Cooper board and it goes into the Z80 socket. So, I don't know the DIP-14 socket/CD4011 chip you speak of.

I assume step #3 is unnecessary since the Cooper board uses only the one ribbon cable to the microprocessor socket.

I replaced the battery a few years ago, thanks! The 35-year-old one measured 3 volts after I took it out - that was unexpected!

That tape covers the window on an eprom (I can feel the slight raised area of the window). If the original part was a rom chip similar to the G1 chip (which appears to be a regular rom chip - pretty sure there's no window), then this eprom is probably a JL Cooper part, correct? If that's the case, all I need to do is buy and burn an eprom with the GA0 rom image and put it there, does this sound right? As you said, I could burn the eprom I pull with the GA0 image but I think I would want to keep it in case I ever wanted to put the Cooper kit back in.

Thanks very much for your time and words of advice!
Top

Sounds like you just need to burn an EPROM and you're good to go!
Top

Yep, sounds like that's all I need to do, thanks! I hate to bother you more, but if you don't mind confirming what my amateur synth sleuthing is telling me I would appreciate it – then I think I'll be done with this chapter.

The service manual lists all the rom updates and the OBXa serial #s they apply to. The last update (#9), lists what looks like two roms - XA-GA0 and XA-G1. The serial number of my synth starts with 822 so I think I fall under the last rev (which starts with SN 820901).

Since one of my roms has a sticker that says OBXa-G1, can I assume that the second rom – where the JL Cooper eprom is right now – would be the GA0? I found and downloaded the GA0 image (the site I linked to in my first post has older roms).

Thanks a ton for helping me out. I hope I can repay the favor someday, if my touring band ever tours again (!) and is in your area! 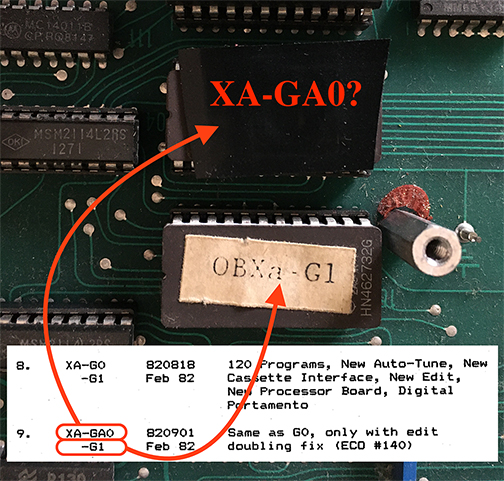 Synthchaser, I just re-read your earlier reply where you detailed where the GA0 rom should be – sorry I spaced there, sometimes it takes a minute

Yeah, you'll need a 2732 EPROM. Each manufacturer had their own prefixes and most of the time, the only differences were the programming voltages. So you just need to find a chip that your EPROM programmer is compatible with... Then maybe download the datasheet for it and compare the pinout to the OBXa schematic,. Odds are it will be the same, but better safe than sorry. I remember there were some lower capacity TMS EPROMs that weren't compatible with the mainstream ones. To the best of my knowledge any of these should work:

(The change from 2716 to 2732 EPROMs explains those unpopulated slots you were asking about).
Top

Thanks - that's great info! I should be good, I think I know someone who can help with burning the eprom for me. Next will be buying a real soldering station (to replace my Rat Shack 15 watt pencil) and getting to work on the voice boards with your rebuild kit. I'm sure there will be more challenges ahead – one thing at a time!
Top
Post Reply
9 posts • Page 1 of 1