Hopefully this is not in the wrong section, but i have never actually seen one, and my internet connection is complete c**p, so forget about google pictures until fall. But does any one use one for making music? if so, could they shed some light on the entire subject?

Disease Factory from VAc used it for several years in succession and successfully. But wtf can i do with it? what can anyone do with it? a complete 101 would be cool.

And i would just ask him, be he wont tell me.
Top

I used one for many years.

The Atari ST was the only home computer with built-in MIDI (in and out). It had no internal HD and was limited to 1Mb RAM but at the time, that was quite a lot. External HDs were available. A friend of mine still uses his ST and a 4Mb (!) HD. The OS (known as TOS) had to be loaded from a bootable disc every time. It was followed a few years later by an updated version known as the Falcon.

In the latter part of the 1980s, several pieces of sequencing and/or notation software were developed for the Atari, such as Pro 12/24, Notator and... Cubase. For the anecdote, Cubase was going to be called Cubit until they realised that in French, the words Cul and Bite meant A*se and D*ck

. The two words don't go well together; not by my standards anyway.

I used Cubase on my Atari 1024 ST for several years. It was quite a stable program, although it would only work with a high resolution monochrome monitor so I had to dump my RGB monitor for one!

Several editor/librarians were written for the Atari, particularly for the then extremely popular Yamaha DX7. Until I got my DX7 keyboard, I still ran Dr. T's DXHeaven editor on my PC under the Steem Atari emulator to program my TX7 module.

I know your Internet connection isn't working well at the moment, but when you can, have a look at this page and follow the links: 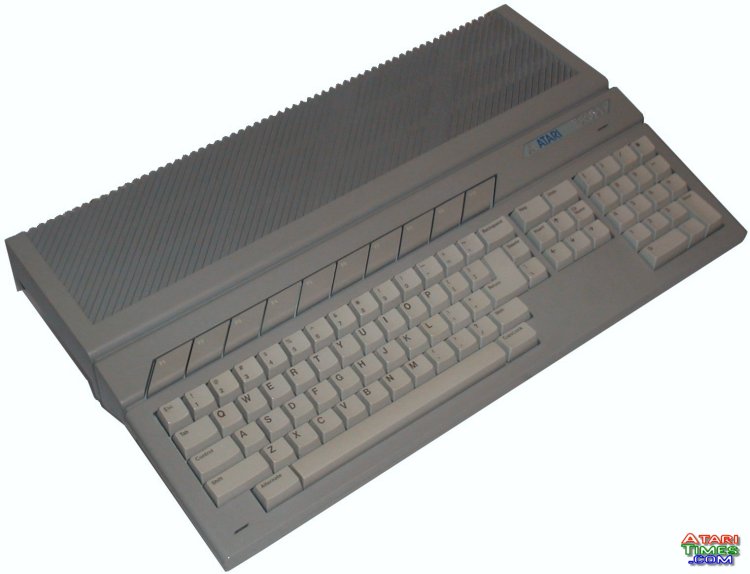 This brings me some fond memories! I made a lot of good music on a 1040STE. I had previously an Amiga 500+ that I used to use just because of the sound generator (that I still miss). Both were great machines, used the same CPU and all that, but for serious music making the Atari and the Steinberg software were the standard in those days, at least in Europe.
I´ve been thinking of buying one again. Seems to me there´s nothing better than a dedicated computer. With Windows there´s zillions of services and applications running that have nothing to do with the process, wasting precious resources. Some people swear the Atari is the fastest MIDI machine around. I can´t recall that as back then there wasn´t much more to compare with, but the response was always flawless, with no signs of latency that´s for sure.
I used to record and edit the sysex messages of my Juno and loop them without any problems. And sometimes would play the 909 from the computer, instead of just syncing them, just to use the different grooves in Cubase.
Mine had the SIMM expansion fitted but with some busy songs it still ran out of memory.
And besides the system disk you needed an extra one to store the songs. I think I kept a disk full of Wavestation sounds too.
If I remember correctly the MIDI-OUT port serves as MIDI-THRU also. You select the function through the software.

There was an Amiga version called the Commodore CDTV that had built-in MIDI ports too, but I think it was already outdated when it came out...

WOW!
Many thanks to gcoudert and Mooger5!!

I think that one day I just might get myself one of those, unless they are super-rare. But I think that would be something neat to have. I don't think anyone uses that anymore..

Thanks a lot guys! Oh, and can you play video games on that? :reindeer:
A.D.I.D.A.S.
[All Day I Dream About Synths]

After using a Commodore SX-64 and 128 for a while I got a Mega 2 ST around 1987. It was a major advance at the time. 2MB's of memory and a Mac-like user interface at a reasonable price. I never exceeded the memory limits which occurred easily on the Commodores. I then got STacy 4 laptop to use on stage. It had 4MB's of memory and I could load all my sequences in memory at once. If you can find any ST model in good working condition at a nice price it might be worth getting. There are very few places that will service them so that could be major drawback.
Prophet 5 rev.2, Pro-One, Juno 60, Jupiter 6, Matrix 12, OB8, MS20, Poly 800, CS70M, DX-7, CP35, Casio PX-5S, Hammond C3/M102, Vox Continental/Super Continental, Gibson G101, Farfisa Compact, RMI 300A, Pianet N, Combo Pianet, S770, S760, S50, NS3C
Top

I used a 1mb 1040STE from '89-'95. I had the complete C-Lab system: Creator (Notator without score edit), Unitor II and Xport. This gave me a total of 96 midi channels on 6 independent midi outs.

The Atari was a revelation after using various hardware sequencers. Also, the timing was rock solid, easily as good as the Akai ASQ10 I had used before getting the Atari. I really liked the C-Lab 4 lane vertical arrangement concept (16 tracks per pattern, up to 4 patterns could play simultaneously) and I personally found it much easier to write tracks in than Cubase.

There was 1 major problem with Creator though; depending on how you constructed the arrangement it would 'stutter' playback going from 1 pattern to the next. This could be avoided, but (in my experience) the necessary workaround considerably slowed down the creative process.

I still have my 1MB 1040ST, with Cubase version 1, but have not used it since about 2000. The mouse is all clunky and the monochrome monitor seems so tiny since I'm used to a 19 inch PC monitor. I never ran out of memory while working with it, but I tended to use lots of ghost parts for pattern based music back then.

Another vouch here for the rock-solid timing, probably due to the very basic nature of the machine. Ironic that a computer that is thousands of times faster cannot even match it today in that sense.
I am no longer in pursuit of vintage synths. The generally absurd inflation from demand versus practical use and maintenance costs is no longer viable. The internet has suffocated and vanquished yet another wonderful hobby. Too bad.
--Solderman no more.
Top

Thank you again for all your shared thoughts and such.
A.D.I.D.A.S.
[All Day I Dream About Synths]

Everyone else covered it pretty well, I had one of these for many many years. Only the first models had the OS loaded on disk after that it was in ROM. Interestingly (and I saw one on E-Bay recently) they came out with a laptop at the end of the run it had midi as well. Later models were refered to as TT and had one 1meg or better. I'm getting nostalgic, better stay away from E-Bay or I'll buy one.