Hi everyone, it's been over a year since my last post. I'm back in the groove a little with some fun tidbits for you.

I recently completely refurbished a Yamaha CS01 down to the keybed bones and managed to get and play with the accompanying BC1... and wow what a difference playing with the BC1 makes for the CS01!!! I can't stress this enough... some controls, like the VCA envelope amount control, don't even make sense unless you have a BC1 hooked up. It's like having an infinitely variable extra envelope added to the synth. Can't stress enough how awesome it is... but it's physically noisy, and it's potentially unsanitary with all of us salivating with the new possibilities of the CS01... so maybe there are some other options.

The note:
The BC jack supplies -9V at the tip and Gnd at the sleeve with signal coming back in on the ring, as seen in its schematic. I have tested and confirmed, that this is fully compatible with a passive TRS expression pedal (in my case I used a Moog expression pedal, but really the only thing that can probably go wrong here is possibly using one of opposite polarity which won't damage anything, just make the pedal work backwards). Why does NOBODY talk about this? I can't find this information anywhere and I think it's super important! You can enjoy the BC port with a TRS passive expression pedal with, in my case, only a 1/8" male to 1/4" female TRS adapter! Please do try this if you have the synth and want to have some fun with extra possibilities. This will work on any BC-compatible port, so try it on your DX7 or Kurzweil with a BC port if you like! This needs to be known.

The project:
I have designed and am currently in the last phase of beta testing a small, simple voltage scaler to allow -2.5 - +5V CV signals converted to -9V - 0V breath controller signals. Please note that the BC jack is NOT CV plug-and-play out of the box! You do need something in between your CV source and the BC jack! I am hoping to solve this with a small expansion unit that would sit beside the CS01. Once I have my design finalized and the prototype finished I will upload the schematic here for all to bask in the glory of making the BC port into a standard CV input... imagine hooking your DX7 up to a modular synth... hmmm...

Anyways, I have some more work to do! Gotta put the magic smoke back into some resistors...

It's officially working!
I don't have a lot of time right now but I'll leave you with a schematic: 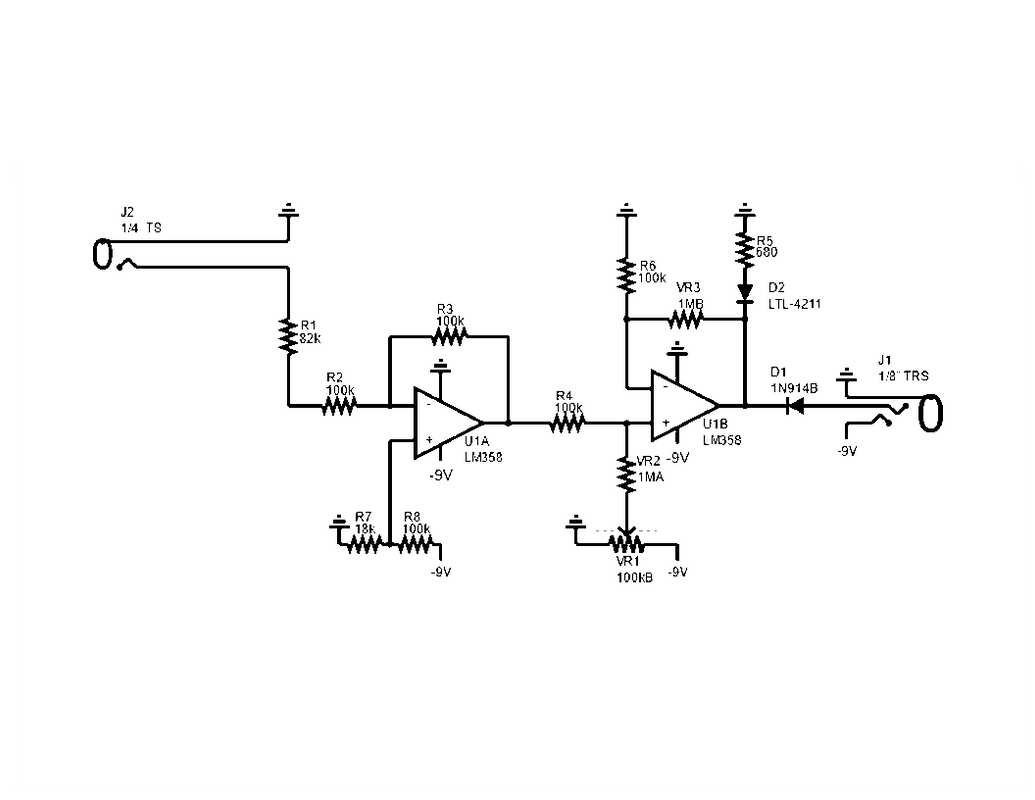 And a pre-made digikey cart with all the parts I used:
https://www.digikey.ca/short/nzdhq8jr

Some notes:
I chose the particular box because it is very similar to the depth and height of the CS01 so it sits nicely beside the CS01, though it is the wrong colour.

I had to cut and redrill one edge of the PCB in the above digicart. I cut it off between columns "4" and "5" and drilled through the adjacent number "3" with a 1/8" bit on top and bottom to make it fit the box.

The box comes with screws for the lid but not for mounting on the included mounting posts. I'm planning on drilling through the mounting posts on the "lid" side as they are too short for self tapping screws, and using a 4-40 nut and screw to hold the board in the box. I will also put feet on the box to keep the nuts off the table.

All resistors can be 1/4W resistors. You could simplify the circuit by combining R1 and R2 into a single 180K resistor. This is a byproduct of an earlier design. I chose to add that input resistor section as a rudimentary form of circuit protection - It may blow the op amp but it shouldn't burn the synth if 120VAC is applied to the input. I'm not willing to test it with MY CS01 and I don't recommend you do either. But if something awful happens, let me know how it goes!

D2 and R5 are optional components to the circuit. If you use the CS01 on batteries a lot you may want to consider leaving them out as the circuit is a lot more efficient without them.

If you decide to leave them in, I specifically chose the LTL-4211 as D2 as it is the closest modern equivalent to the power LED on the CS01. Similar viewing angle, similar intensity, similar wavelength, same size (3mm). I do not think you can find an LED that better matches the built-in LED if you care about that.

I will post pictures of the exterior once I have the box drilled up. I will upload a recommended perfboard layout tomorrow. When I have time maybe a video showing it work too!

Okay, I have put together a sample board layout which is very similar to what I built: 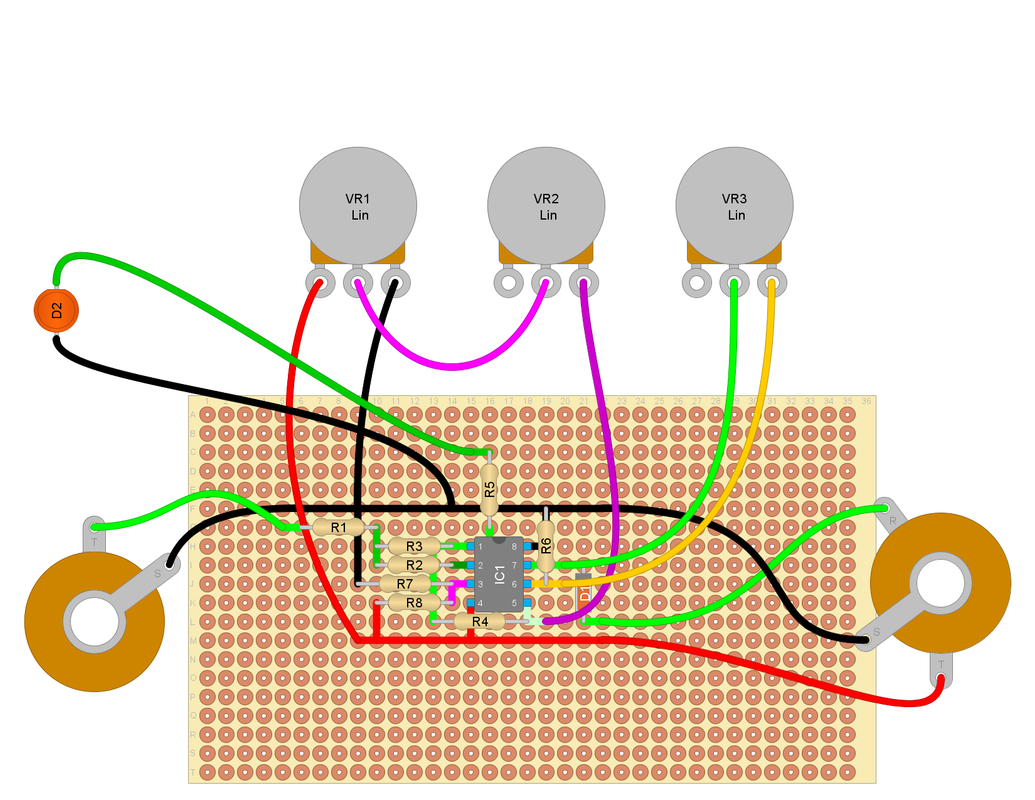 Also I forgot to mention the purpose of each pot:

VR1: Offset - For a signal which sits between -9 - 0V, sets the relative voltage offset (turn right to make the signal go higher, left to go lower)
VR2: Scale - Turn to the right for more signal from the input, fully to the right should almost eliminate response from the "Offset" knob. Turn to the left for more effect from offset - fully to the left should almost override input signal and only allow the "Offset" knob to affect the output.
DESIGNER'S NOTE:
This could probably be improved by using a dual-gang pot with a log and reverse log gang. Use the reverse log section to replace R4 to have more defined control over whether the offset knob or the input signal dominates the output.
VR3: Gain - Boost the output signal from near-unity to approximately 11x gain.
Grapple with reality.
Top

Hi Mathew - I got a CS01 used about ten years ago and have pondered the BC input often. I'm not much of a hardware guy, so while I wondered if there was any way CV could give it instructions, I don't really have any idea how to investigate besides googling every few years and hoping someone has said something about it somewhere.

Your post here is the most promising I've seen, but I don't totally understand what you've posted! Do you have a project page anywhere, or a video that demonstrates it, or anything I could learn more from?

Thanks either way, and great work solving this eternal mystery! I'm definitely going to check out the expression pedal... and I wonder what other type of input could modulate that parameter...?
Top

plus various flutey sort of things

.. to bask in the glory of making the BC port into a standard CV input... imagine hooking your DX7 up to a modular synth... hmmm...

I'm not planning to do it 'cos I'm digital from start to finish (bar the amp and speakers) but this looks a lovely little project to play with. How've you enjoyed putting it to use since?

never heard it put that way before - love it