Topic Icon to let others know your topic has been solved.
Post Reply
10 posts • Page 1 of 1

I am struggling with mine EMU which has been damaged during transportation (I hate courier companies!)

System is working I can load banks but when I hit the keys there is no sound only some white noise coming out.
I checked all outputs no sound at all.

Any idea what I should check?

Edit: Seems that that there is also problem with system.
When I press Play button the system is restarting or stuck.
(The noise in video comes from ventilator not from Emax

Did you go through the service manual? I can see from the other thread that you have not.

Pull each ribbon connector, clean the pins and reseat them. If that doesn't work, check their continuity. They fail. Buy new ribbon cables.

Honestly though, you should take this to a tech. It's worth too much money to mess around with.
Bandcamp
Facebook
Apple Music
Soundware Shop
Top

Looking at the diagnostics manual and comparing it to the behavior from your video, it can indicate multiple problems. Depending on which LED is lit when this crash happens, it can be either:

Dynamic Allocation LED:
Unable to initialize the LCD. If this test fails, the unit will lock up.

Master LED:
Unable to write and then read back a test byte to location 0 of the
E-Chip RAM.

Can you try running the diagnostics from the special menu? [Master, 8, 8, Yes] and then pick one of the tests to check the RAM and ERAM.
Last edited by mateomorikone on Sun Jan 30, 2022 9:12 pm, edited 1 time in total.
Top

I checked "Special" menu but there is nothing I could use to test RAM, ERAM. Seems it depends on the system version.

When you said that might be an issue with E-Chip I just realized that when the fist time I opened the emu case (after unlucky delivery) The E-Chip was loose inside the case, slipped out of it's socket probably due to the shocks during transpiration.
I have put it back checked pin connection but it could be damaged

I did a few shots in those days so that I can try to get back some money from insurance.

Here is E-Chip lost in space:

I did not consider (or maybe I did not want to consider) that the E-chip might be damaged because I though that if system is running (I'm mean loading banks etc.) this chip must to ok but it's no like that system can run even without the E-chip (I just made a test I pull out the chip and no changes, system is loading but when I hit the key only white noise comes out from the speakers..)

So I'm pretty pissed off, probably all is ok expect this E-Chip but chance to get this chip is almost zero...

Sure, you can run Emax without the E-chip, because there are 32008 CPU and EPROM chips responsible for booting the system. E-chip can read and write sample data from RAM and do some DSP stuff. Unfortunately, it is extremely sensitive to static electricity and generally a very delicate part. If it got toasted, that's bad luck as finding replacement for a particular chip revision is almost impossible.
Top

Any possibilty to diagnose the E-chip?
Top

If the Emax was truly working properly before it was shipped (I am assuming that to be true), and you did not impulsively put the E-Chip in backwards or something else careless then I suspect the E-Chip is probably not actually dead.

That revision has the E-Chip on a daughtercard, so it is possible there is a fault with that, or the socket which fits it, but the E-Chip should have survived physically, so long as nothing has since happened to it electrically.

If the E-Chip assembly was flailing around wildly for a good portion of its postal voyage then it's hard to say for sure... but you should take it to a tech.
Top

Yes I confirm, Emax was working before and E-Chip has been inserted properly.

Thanks guys for your input.
I will try to find someone to help to diagnose E-CHip

Considering the symptoms and base on your knowledge what would be the Top3 elements/group of elements that could caused such failure? (form logical point of view)

Top1 will be E-Chip itself (because we know it slipped out during the transportation) or around like E-Chip pcb card or sockets.

Any suggestion for Top2 and Top3?
Top

The diagnostics manual indicates that any static noise or distortion can be related to miscalibrated E-chip clock. Consider taking the instrument to a tech who can diagnose the chip with an oscilloscope and perform a clock duty cycle calibration.
Top

I did some E-Chip measurements
What do you think, does the chip look ok? 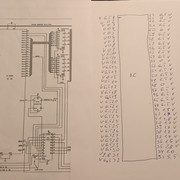